Published by
J. Clement,
Jul 29, 2021
Twitch is a live streaming platform that offers gaming video content (GVC) and other forms of online entertainment. The service, which is available on various devices and operating systems, allows users to watch their favorite gamers in action while interacting with them via chat. First launched in 2011, the San Francisco-based company and recent subsidiary of Amazon has become a global phenomenon and the leading platform for viewing gaming video content worldwide. In the first quarter of 2021, the number of hours watched on Twitch reached a record 6.34 billion, which was more than twice the amount of time users spent on YouTube Gaming Live and Facebook Gaming combined.

As the world’s largest social video platform and gaming community, Twitch has rapidly grown its userbase in recent years. In the United States, the country that accounts for the highest share of Twitch traffic, the number of Twitch users jumped from 33 to 41 million in 2020, a surge that was boosted by nationwide coronavirus (COVID-19) lockdowns. Another record figure was reached during the first quarter of 2021 when the average number of concurrent viewers on Twitch surpassed 2.9 million. While gamers and gaming fans have always been the main driver of platform growth, Twitch also fuels audience growth by expanding its non-gaming content.

The Twitch universe is constantly expanding in size and content diversity alike. Over the past few years, the number of active streamers on Twitch has grown from three million in 2018 to almost 10 million in early 2021, with more newcomers and established broadcasters entering the playing field each day. As of early 2021, U.S. gamer Ninja was the most subscribed Twitch streamer worldwide. After briefly switching to Microsoft’s now-defunct Mixer service, the streaming superstar and face of Fortnite boasted a following of over 16.6 million on Twitch upon his return. Fextralife and Riot Games recently ranked as the most viewed Twitch channels worldwide, with 1.4 billion and 1.2 billion total views, respectively. On the other end of the Twitch ecosystem, non-gaming content and creators also consistently draw millions of viewers, with the Just Chatting and Music & Performing Arts categories seeing particularly high viewership growth since the coronavirus pandemic moved live events and social gatherings into the digital sphere.

What are the most popular Twitch games?

Fortnite was the most streamed game on Twitch in March 2021. With a total of 6.99 million hours streamed on the battle royale game within a month, Epic Games’ long-standing smash hit surpassed other popular titles such as Call of Duty: Modern Warfare and Apex Legends on the platform. Fortnite also ranks second in the running for the most viewed game on Twitch, topped only by fan favorite League of Legends, which amassed an average viewer count of 218 thousand in April 2021.

In the following 7 chapters, you will quickly find the 45 most important statistics relating to "Twitch".

Statistics on the topic
Number of Twitch users in the U.S.
41.5m
Number of hours watched on Twitch worldwide in Q1 2022
6.13bn
Twitch revenue share of the gaming video content (GVC) market
22%

The most important key figures provide you with a compact summary of the topic of "Twitch" and take you straight to the corresponding statistics. 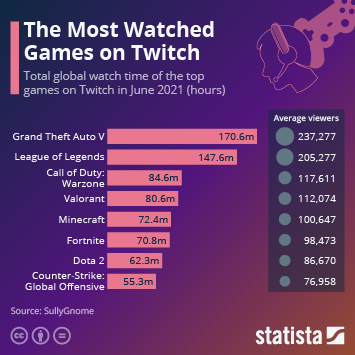