Egypt is among the largest economies on the African continent. In 2021, it ranked third, with a gross domestic product (GDP) of roughly 403 billion U.S. dollars, following Nigeria and South Africa. Although major economies around the world were faced with contractions due to the coronavirus (COVID-19) pandemic, the country managed to sustain a positive real GDP growth rate as of the same period. Additionally, the cumulative service sector was the most dominant contributor to the GDP, however, manufacturing industries alone contributed more than 16 percent.

In addition, Egyptian imports outweigh exports, leading to a negative balance of trade. Even though mineral fuels, oils, and distillation products were the fundamental category of imports and exports for the country, the cumulative imports and exports were mainly non-petroleum products. Electrical and electronic equipment, along with machinery, nuclear reactors, and boilers were the leading imports into the country in 2019, totaling around around 14 billion U.S. dollars. As for the exports, pearls, precious stones, metals and coins, and "plastics" were among the principal products being sold by the country.

Fluctuating inflation and the job market

Since the mid-1980s, the inflation rate has been fluctuating, coming to a peak of approximately 25 percent in 1987 and dropping to 2.4 percent in 2001 and 2002. More recently, in 2017, inflation once again increased to 23.5 percent. This occurred after the Central Bank decided to float the Egyptian pound. Nevertheless, the unemployment rate was decreasing since the peak of 2013. It is worth noting that the same year, former President Mohamed Morsi was overthrown by the military after mass protests took place. In 2020 and 2021, the unemployment rate has been on the rise once more. Of those employed in 2020, 21 percent were employed in the agriculture, followed by 14 percent in construction and building.
This text provides general information. Statista assumes no liability for the information given being complete or correct. Due to varying update cycles, statistics can display more up-to-date data than referenced in the text.

Saifaddin Galal
Research Expert covering the economy and society on Egypt, South Africa, and Ethiopia
Get in touch with us now
Published by Saifaddin Galal, Sep 23, 2022 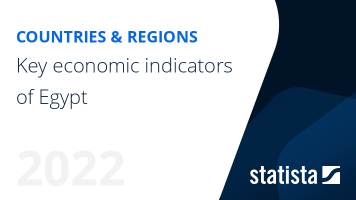 The most important key figures provide you with a compact summary of the topic of "Key economic indicators of Egypt" and take you straight to the corresponding statistics.