The concept of ‘fake news’ has become more and more widespread in recent months, monopolizing both debates and news feeds. If the phenomenon of "hoax" is not recent, the advent of social networks has propelled their dissemination, seizing and distorting so-called ‘real’ facts. The controversy surrounding fake news highlights the problem of the credibility of information spread online, but also that of the confidence and lack thereof of the French people in the media to a broader extent.
The majority of French people consider themselves interested in the news broadcast by the media, whereas less than ten percent claim to not be interested at all. That level of interest remained stagnant over the 15 past years, despite some slight fluctuations. General television channels were the primary source of information for many French consumers, most notably in order to deepen their knowledge of international or regional news, while websites or mobile applications of print media titles came in first for digital sources.

According to the French population, regional and national newspapers were the most trustworthy media, followed closely by the radio channel France Info and the TV channel France Télévisions News. While the level of trust in newspapers fluctuates, around half of respondents stated that events usually happen as the press reports them. Indeed, neutral sources were the most sought-after sources, while only a minority of French people wanted to get news from a partial source, which either shared their point of view or challenged it. Still, French people are also highly suspicious of journalists, and do not consider them completely independent, seeing them as victims of external pressure from politics, power, and money.

The multiplication of fake news, most notably on social media, is one of the reasons the French population tends to trust digital sources less. Only very few respondents were adamant that they had never been fooled by fake news, while a great majority of internet users spotted them regularly.
This text provides general information. Statista assumes no liability for the information given being complete or correct. Due to varying update cycles, statistics can display more up-to-date data than referenced in the text.
Published by Statista Research Department, Sep 7, 2022

Interest in news broadcast by information channels in France 2021

News aggregators used by French web users to get news 2020 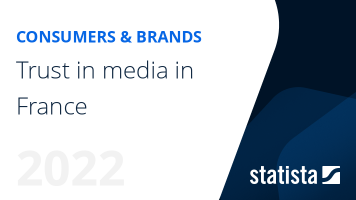 Go to report Trust in media in France
Top Seller

The most important key figures provide you with a compact summary of the topic of "Trust in media in France" and take you straight to the corresponding statistics.

Have already been fooled by fake news