Published by
Justina Alexandra Sava,
Sep 1, 2022
The revenue of the telecommunications sector in Latin America was worth nearly 81 billion U.S. dollars in 2021. Despite ranking fourth in terms of population, Argentina had the third biggest telco industry spending in Latin America in 2019, only behind Brazil and Mexico. By 2021, Argentina peaked its telecommunications revenue at 552 billion Argentine pesos, a value nearly twice as high as in 2018. Most of the South American country’s telco revenue came from the mobile service segment, while fixed line services amounted to approximately 62 billion Argentine pesos as of September 2021.

The country has had a high mobile penetration rate over the past years. After a declining trend in the number of mobile telephony lines that began in 2016, the number increased in 2021, totaling almost 58 million by the end of the third quarter. Nearly 90 percent of these connections were prepaid lines. In terms of mobile infrastructure, Argentina benefits from a 90 percent LTE coverage provided by Telefonica. At the same time, the country has 33.5 thousand active 4G base stations, with more than one-third being concentrated in the Buenos Aires Province. 5G services were launched for the first time in February 2021, based on re-farmed LTE frequencies. By 2025, it is expected that 5G connections will account for 11 percent of all mobile connections in Argentina.

Telecom Argentina is a local telephone company, very popular in the Northern part of Argentina, including the entire city of Buenos Aires. Along with Telefonica de Argentina – which dominates the southern part of the country – the companies formed a duopoly lasting until the end of 1999. After peaking its revenue in 2019, Telecom Argentina recorded small drops in revenue, amounting to approximately 425.5 billion Argentine pesos in 2021. The company is also the owner of Telecom Personal, one of the only three mobile phone companies in Argentina. Consequently, it comes as no surprise that the most profitable segment of Telecom Argentina is its mobile services. However, in 2021, the company also dominated the fixed-line broadband internet market, totaling a market share of 41.5 percent. Telecom Argentina has had a remarkable development over the past years in terms of net income. After two years in a row of recording losses worth billions of Argentine pesos, the company registered a net income of almost 10 billion Argentine pesos in 2021.

In the following 6 chapters, you will quickly find the 29 most important statistics relating to "Telecommunications in Argentina". 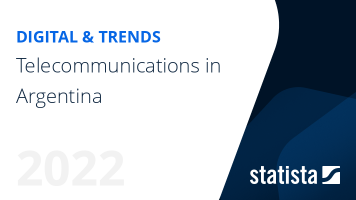 The most important key figures provide you with a compact summary of the topic of "Telecommunications in Argentina" and take you straight to the corresponding statistics.