Google Cloud, or Google Cloud Platform (GCP), formerly known as App Engine, is a cloud computing services suite launched by Google in 2008. GCP provides infrastructure as a service (IaaS), platform as a service (PaaS), and software as a service (SaaS) to organizations worldwide. Importantly, GCP is a service mainly for building and maintaining original applications that can subsequently be published from its hyperscale data centers. In 2021, Google Cloud generated revenues of 19 billion U.S. dollars, which represents approximately seven percent of Google's total revenues.

Google has dedicated data centers that span a global network across more than 200 countries. Customers benefit from this global network of cloud regions when using a console or an API to spin up compute, storage, network, and security capabilities. Further, these infrastructure technologies can be used in different contexts, namely Google’s public cloud, hybrid cloud, multi cloud, and edge cloud environments.

Google’s cloud resources contain over 100 tools and products. Notably, GCP is strong in artificial intelligence (AI) and machine learning (ML) in the sector, leveraging these technologies for applications. For example, it is both possible to build and deploy AI models as well as take advantage of Google’s pre-trained ML APIs like vision AI or natural language API. Additionally, GCP empowers customers by being committed to an open cloud approach which relies on open source.

Some of the principal services GCP offers to customers include Google Compute Engine (GCE), enabling users to launch virtual machines on demand, Google Cloud Storage (GCS), which is a storage web service on GCP’s infrastructure. Other key products include the Google App Engine (GAE) for cloud-native development as well as Anthos, the company’s multi cloud deployment platform, and Google Kubernetes Engine.

Google Cloud is among the top cloud providers

GCP’s services are comparable to those of Amazon Web Services (AWS) and Microsoft Azure. Together with these two competitors, GCP is considered among the major cloud providers, taking approximately 8 percent market share. GCP's market share points at the fact that historically, GCP has been less aligned with enterprise customers. Further, as compared to AWS and Azure, GCP is offering fewer services, while gearing their cloud model more towards software developers.

Nevertheless, GCP is working towards being more integrated with enterprise IT, illustrated by a rise in enterprises adopting Google Cloud. With their technological expertise, GCP already managed to attract some acclaimed customers from various industries, including Spotify and Goldman Sachs.
This text provides general information. Statista assumes no liability for the information given being complete or correct. Due to varying update cycles, statistics can display more up-to-date data than referenced in the text. 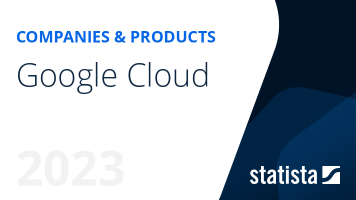 The most important key figures provide you with a compact summary of the topic of "Google Cloud" and take you straight to the corresponding statistics.