Initial public offerings (IPOs) are important instruments used by companies to generate capital. An IPO is the stock market launch of a privately-held company, also known as "going public", which allows institutional and retail investors to purchase shares in the company. Europe is the most popular destination for IPOs in the Europe, Middle East, and Africa (EMEA) region, though Mainland China is the most popular destination worldwide. The United States is the second most popular destination for companies seeking to go public. Despite the COVID-19 pandemic, IPO activity actually increased in both China and the United States in 2020.

Why are more IPOs filed in China and the U.S.?

IPO activity in Europe declined over the past decade and shows no sign of recovery. Meanwhile, the number of IPOs in China and the U.S. have remained high. One reason for this is the high concentration of unicorns, private companies valued at least one billion U.S. dollars, in those two regions, which are more likely IPO-candidates than the typically smaller, less internationally active European startups. Asian and North American unicorns have significantly higher market values than European unicorns, which impacts how many of them file for an IPO, because market valuation plays a large role in setting the IPO price.

Why has the SPAC trend skipped Europe?

Another reason that IPO activity was so high in the United States in 2020 can be summed up in one word: SPACs. 2020 was the year of the SPAC, at least in the U.S., and this trend continued in 2021. However, only three SPAC IPOs were completed in Europe in 2020, which pales in comparison to the boom seen across the pond. This gap is due to both the difference in listing rules between the two regions, as well as a general reluctance from the companies themselves. These hurdles led to some European SPAC sponsors opted to list on U.S. exchanges rather than on European exchanges.
This text provides general information. Statista assumes no liability for the information given being complete or correct. Due to varying update cycles, statistics can display more up-to-date data than referenced in the text.
Published by Statista Research Department, Aug 24, 2022

Number of IPOs in the EMEA region
459 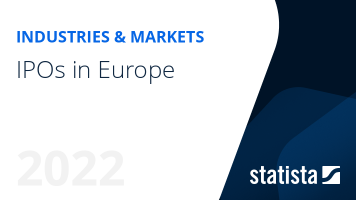 The most important key figures provide you with a compact summary of the topic of "IPOs in Europe" and take you straight to the corresponding statistics.