Digitalization dominates industry and consumer consciousness in one way or another, as well as the news. In essence it is defined as using digital technology in a business model, therefore changing it and leading to new ways of generating revenue and producing value. Digitalization can also change manufacturing due to the implementation of new, digitally controlled machinery which may not need to be physically operated or monitored by a person.
Digitalization has the potential to change businesses, industries and jobs done by humans to the core, with wide-ranging consequences. Based on a survey conducted in Germany in 2020 among skilled labor businesses, respondents noticed positive impacts of digitalization. 43 percent responded they had acquired new customers, while 24 percent expected a long-term increase in revenue. In general German companies also noticed other changes which may affect businesses across various industries. Digitalization may simply render some existing products or offers obsolete. Almost half of respondents to the survey agreed they would take certain products and services off the market as a result of going digital. With some selections discontinued, new goods will take their place.

Digitalization of the workplace is closely connected to Industry 4.0. Much has been written about what is also referred to as the “fourth industrial revolution”. Industry 4.0 bundles together the impact of new technology, including smart technology, on manufacturing and industrial work. This impact includes increasing automation so that machines do not need human attention to run, as well as new communication and monitoring methods. In short, machines are developed to be smart so as to be able to deal with issues. Experts point out that Industry 4.0 is not technology as such, but an approach which is significantly influenced by technological developments. In the German manufacturing industry, 53 percent of companies employing 250 people and more used industrial robots.
This text provides general information. Statista assumes no liability for the information given being complete or correct. Due to varying update cycles, statistics can display more up-to-date data than referenced in the text.

Impact on workplace and profession 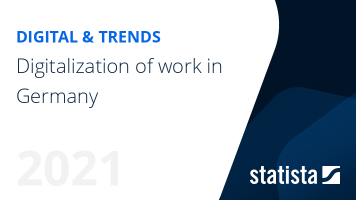 Go to report Digitalization of work in Germany
Top Seller

The most important key figures provide you with a compact summary of the topic of "Digitalization of work in Germany" and take you straight to the corresponding statistics.