The Spanish beer industry has been going through a significant period of expansion since the 2000's. Both the number of companies dedicated to brewing and the volume of beer production have grown since 2013, even though the latter suffered a drop due to the pandemic.

Spanish breweries are among the most popular in the world. For example, Mahou's "Mahou Cinco Estrellas", received the highest distinction at the World Beer Challenge awards in 2021. This brand is also among the leaders in the Spanish market, indeed it is the most popular beer among consumers in Spain.  One of the reasons for the success of Spanish beer worldwide is the launch of new products in line with new trends: toasted, craft, Radler, with alcohol, without alcohol, fruity, gluten-free, blonde, with barley, with wheat, and more.

Recent data shows a positive trend in household beer expenditure in Spain. The Balearic Islands is the autonomous community with the highest per capita beer spending in Spain, at slightly below 40 euros per person annually. Concerning the preferred type of beer, alcoholic beer is by far the most preferred type by Spaniards. However, non-alcoholic beer consumption is increasing. In 2020, Spanish households drank over 180 million liters of non-alcoholic beer.
This text provides general information. Statista assumes no liability for the information given being complete or correct. Due to varying update cycles, statistics can display more up-to-date data than referenced in the text.

Eloise Trenda
Research Expert covering global food topics with a focus on the French, Spanish, and LATAM markets
Get in touch with us now
Published by Eloise Trenda, Feb 4, 2022

Best Spanish beers awarded in the World Beer Awards in 2021 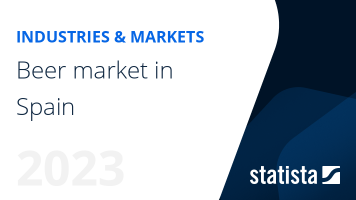 The most important key figures provide you with a compact summary of the topic of "Beer market in Spain" and take you straight to the corresponding statistics.