Business segments that are closely connected to the chemicals industry range widely, from agriculture, automobile manufacturing, metal processing, and textiles, to power generation. By providing industry with the raw materials needed to produce the products used in various aspects of daily life, the chemicals industry is broadly fundamental to modern society. Globally, the chemical industry generates a total revenue of approximately four trillion U.S. dollars every year. Almost 45 percent of that amount came from China alone as of 2020. Not only does China generate the highest revenue from the chemical industry in the world, but it is also a leader in chemical exports, with an annual export value of over 72 billion U.S. dollars. At the same time, China's domestic chemical consumption amounted to 1.59 trillion euros (or 1.77 trillion U.S. dollars) as of 2020.

With 330 billion U.S. dollars of total revenue and over 725,000 people employed, organic chemical material manufacturing is an important part of China's chemical industry. Organic chemicals are also China's largest chemical export category, accounting for over 75 percent of Chinese chemical exports based on value. The top destination for Chinese chemical exports as of 2019 was the United States and India, while other major destinations were predominantly emerging countries. On the other hand, the largest importers of chemicals from China were Japan and South Korea, each importing over 20 billion U.S. dollars’ worth of chemicals in 2019, followed by the United States and Germany. Both chemical exports from China and chemical imports to China had been steadily growing in recent years, however, the value of imports has been slightly higher than the export value, leading to a net import value of around 24 billion U.S. dollars in China as of 2019.

As the backbone of the economy, the largest chemical companies in China are mainly state-owned. Sinopec and PetroChina are the biggest oil, gas, and petrochemical companies in the country in terms of revenue, with each having generated over 2.5 trillion yuan of revenue in 2020. Another market leader in the global chemicals industry, Wanhua Chemical Group, is listed on the Shanghai Stock Exchange and specializes in polyurethane (PU), selling over 2.8 million metric tons of PU products in 2020.

In 2020, the global chemical industry took a major hit as a result of the global COVID-19 pandemic, just like other industries. Due to the change in consumer habits and suspension of supply chains, many global chemical companies reported a lack of growth or even a two-digit year-on-year sales dip, and Chinese counterparts were no exception. However, with consumption picking up speed, China is expected to lead in the growth of the chemical industry like before as the global manufacturing hub.
This text provides general information. Statista assumes no liability for the information given being complete or correct. Due to varying update cycles, statistics can display more up-to-date data than referenced in the text.
Published by Lucía Fernández, Mar 29, 2022

Value of chemicals exported from China to the U.S.
15.8bn USD 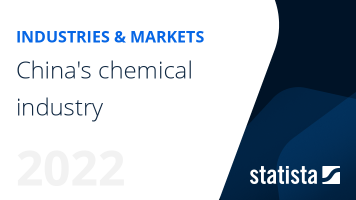 The most important key figures provide you with a compact summary of the topic of "Chemical industry in China" and take you straight to the corresponding statistics.