Migration in the UK- Statistics and Facts

Published by Statista Research Department, Jul 9, 2021
In the twelve months to March 2020, approximately 715,000 people migrated to the United Kingdom, with 403,000 people emigrating, resulting in a net migration figure of 313,000 people. Between 1964 and 1993, the number of people entering the UK and the number of people leaving were relatively balanced, with immigration accelerating significantly from 1994 onwards. Since 1999, net migration has been the main driver of UK population growth, with natural change (the difference between births and deaths) accounting for a progressively smaller demographic growth share.

After World War Two, the British government encouraged immigration from the British Empire's colonies to the UK mainland to meet postwar labor demands. One of the most important groups, who migrated to the UK from the Caribbean between 1947 and 1971, became known as the 'Windrush Generation,' named after one of the first ships arriving in the UK. In more recent years, immigration from the European Union, particularly after the EU's 2004 enlargement, further added to the levels of immigration to the UK. The percentage of British people who saw immigration as an important issue facing the country also rose during this period, with a peak of 42 percent recorded in 2015.

High levels of anxiety about immigration in 2015 were undoubtedly influenced by the European Migrant Crisis, which was at its height in that year. These concerns would also play an influential role in the Brexit referendum the following year, which saw the UK crash out of the European Union, with freedom of movement being one of the main casualties. Since the end of 2018, the UK has also witnessed a marked increase in the number of people trying to reach the country by crossing the English channel from France, reaching a peak of 1,900 monthly crossings in September 2020.

As of 2020, there were approximately 815,000 Polish people living in the UK, the most of any non-UK nationality. Between 2008 and 2017 the Polish population of the UK more than doubled from 502,000 to over 1.02 million, with the Brexit vote likely a factor in the overall decline since 2017. Romanians were the next most common foreign-born nationals in the UK, with a population of 404,000 in 2020. Furthermore, of the 4.9 million people who had applied for the UK's EU settlement scheme, 911,000 were Polish, and 8,360 were Romanian. The EU settlement scheme is intended to allow EU nationals to remain in the UK, an issue reciprocated by the EU regarding the status of migrants in the UK living in EU member states.

There is also an increasing number of study visas granted in the UK, reaching a peak of 404,000 in 2019, with Chinese students being the most numerous nationality to apply. When it comes to work visas, the most common nationality granted this type of visa were Indian nationals, at almost 35,000 in 2020/21.

In the following 5 chapters, you will quickly find the 41 most important statistics relating to "Migration in the UK".

The most important key figures provide you with a compact summary of the topic of "Migration in the UK" and take you straight to the corresponding statistics.

Migration and integration in Germany 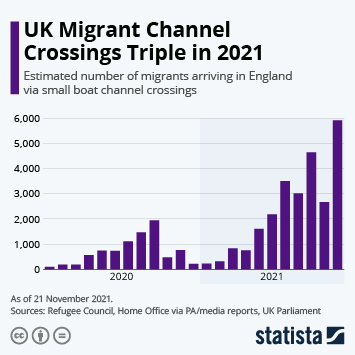