South Korea is known for its well-developed financial system, which has undergone remarkable quantitative and qualitative development after the 1997 Asian financial crisis. Bank consolidation in the early 2000s and the subsequent rise of financial holding companies were accompanied by significant growth in banks' total assets and numbers of employees. The further opening of the financial sector has also attracted more and more foreign investors and financial institutions to the country. Moreover, the financial soundness of South Korean banks, as measured by the capital adequacy ratio (CAR), has steadily improved.

The main source of income for South Korean banks has traditionally been the interest they receive on various loans to companies and individuals. Non-interest income accounts for a relatively small share. However, given the low interest rates in recent years and growing competition in the banking sector, domestic banks have started to gradually increase their non-interest income. For example, they have taken various measures, such as expanding abroad or extending services into areas such as asset management, telecommunications, and food delivery services.

Having been gradually forced to close their branches in recent years, traditional banks have expanded their online and mobile banking services and launched better and more customer-friendly apps. How traditional banks will deal with increasing digital competition and to what extent digital banks can and will replace traditional banks will be another interesting aspect in the development of the South Korean banking sector.
This text provides general information. Statista assumes no liability for the information given being complete or correct. Due to varying update cycles, statistics can display more up-to-date data than referenced in the text.
Published by L. Yoon, May 25, 2022 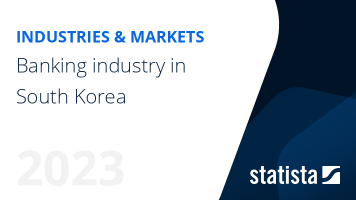 The most important key figures provide you with a compact summary of the topic of "Banking industry in South Korea" and take you straight to the corresponding statistics.