Contributions of SMEs to the European economy

Although Germany has the largest economy in the European Union it has only the fourth-highest number of SMEs, behind Italy, France, and Spain. This is due to the fact that these countries had a higher number of micro-sized businesses, in the EU, at 3.36 million, 2.81 million, and 2.46 million respectively. Germany had a far higher number of small businesses, and medium-sized enterprises, however, at 363,462 and 55,518 respectively. These larger SMEs, although fewer in number than micro-sized businesses account for a relatively similar share of employment and value added. For the European Union as a whole, SMEs employed approximately 84.6 million people, and had a combined value added of 3.9 trillion Euro. Among micro-sized and small enterprises, the wholesale and retail trade sector was the most common industry sector, while manufacturing was the most common industry sector amongst medium-sized businesses.

The main strategy for the European Union with regards to SMEs is improving their digital capabilities, while simultaneously making them environmentally and socially sustainable. According to a survey of European SMEs in 2020, cloud computing and high-speed infrastructures were among the most popular types of digital technology adopted by SMEs, while blockchain and robotics among the least adopted. In terms of sustainability strategies, the most popular actions taken were improving employment conditions and recycling or reusing materials. In terms of barriers to achieving higher levels of digitalization, almost a quarter of SMEs reported that uncertainty about future digital standards was impeding further progress. For barriers to becoming more sustainable, the most common reason given was a lack of consumer or customer demand.

In the following 5 chapters, you will quickly find the 30 most important statistics relating to "SMEs in Europe". 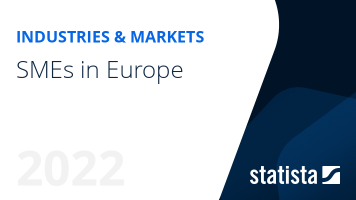 The most important key figures provide you with a compact summary of the topic of "SMEs in Europe" and take you straight to the corresponding statistics.

Businesses in the UK