Algeria is among the leading oil producers and exporters worldwide. Amounting to over 12 billion barrels, its proven crude oil reserves are the third-largest in Africa after those of Libya and Nigeria. In 2021, crude oil production stood at around 1.4 million barrels per day. Oil and fossil fuels dominate Algeria's industrial sector, create significant export value, and impressively contribute to the economy. In fact, oil revenue is the main source of income for the country and accounts for nearly 25 percent of the GDP. Algeria is essentially dependent on the hydrocarbon industry, and at the same time vulnerable to the volatile oil market.

The origins of the Algerian oil industry

The first oil discoveries in Algeria date back to 1956. While French colonizers initially had control of local production, Algeria started to directly manage its oil resources after the 1962 War of Independence. During the process of nationalization of the oil industry, the state-owned enterprise Sonatrach was founded in 1963. Sonatrach has, since then, controlled all the processes of oil production, including exploration, extraction, refining, and marketing. This has allowed them to become one of the largest oil companies in Africa. In addition, Algeria solidified its role as a main oil producer and exporter in the international landscape by joining the Organization of the Petroleum Exporting Countries (OPEC) in 1969.

Export trade falls due to COVID-19

Hydrocarbons massively contribute to the Algerian foreign trade, as oil and mineral fuels account for around 95 percent of the total exports. Nevertheless, after peaking in 2008, the value of petroleum products exported from Algeria has been declining in recent years. This gradual fall was due in part to decreasing production, fluctuating oil prices, infrastructure issues, as well as increasing domestic consumption. In 2020, the coronavirus pandemic caused a severe global crisis with a dramatic decline in oil prices worldwide. That year, crude oil exports from Algeria fell by around 30 percent compared to 2019.

The decline in petroleum exports substantially affected the Algerian economy. Since the discovery of oil, the country has been relying on hydrocarbons. The high oil rents resulted in generous government subsidies, especially within the energy sector. Despite the growing service focus and attempts to increase agricultural production, the economy is still heavily dependent on oil resources. For instance, crude oil accounts for approximately 34 percent of the primary energy produced and, together with natural gas, makes up around 88 percent of the country’s energy mix. Algeria has, however, ambitious renewable energy targets, with the aim that clean energy would represent 40 percent of the power generated by 2030.
This text provides general information. Statista assumes no liability for the information given being complete or correct. Due to varying update cycles, statistics can display more up-to-date data than referenced in the text.

Mariam Saleh
Research Expert covering North Africa, specializing in the socio-economic environment of Algeria, Libya, Tunisia, and Morocco
Get in touch with us now
Published by Mariam Saleh, Aug 30, 2022 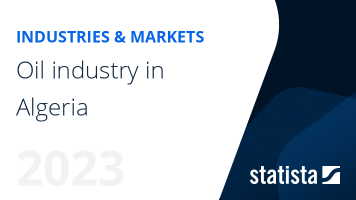 The most important key figures provide you with a compact summary of the topic of "Oil industry in Algeria" and take you straight to the corresponding statistics.