The COVID-19 pandemic has reinforced the need for digitalization in the public sector. As fast access to reliable information and effective communication between citizens and government agencies have become more important than ever, most countries have expanded their public online services and developed digital strategies. South Korea is one of the countries that started this process much earlier. With its highly developed information and communications technology (ICT) sector, South Korea successfully digitalized its government services several years ago. Today, it has one of the leading e-government systems in the world.

E-government (or electronic government) refers to the use of ICT for government services. The computerization of key administrative processes began as early as the 1970s in South Korea, followed by the widespread introduction of e-government services in the 2000s. South Korea was also the first country in the world to adopt an E-government Act in 2001. The technological development created a demand for more digital administrative services, which in turn led to the introduction of new, innovative online services.

Nearly 90 percent of the country’s population now uses e-government services and almost all are satisfied with them. One of the most used websites is Gov.kr, which offers an average of more than 94 thousand services of central government ministries, local governments, and public institutions. Citizens can easily obtain official documents and certificates, apply for government aid, or get up-to-date information from various authorities.

South Korea's response to COVID-19 is also worth noting in this context. Often cited as a best practice, the strategy relied in part on effective communication with citizens enabled by various new online services. For example, through the online contact tracing service, the government provided information on locations visited by people who tested positive for COVID-19 or the type of transportation used by these individuals. When entering the country, all travelers were required to install the "self-quarantine safety protection app" and the "self-diagnosis app" on their mobile phones to check their health status for two weeks after arriving in South Korea.

South Korea now plans to comprehensively digitalize its government services by 2025. The aim is to introduce a cloud system in all public administrations and institutions and digitalize 80 percent of all public services. However, this proactive approach by the government also poses some information security risks. For example, there are still not enough information security departments in government agencies and public institutions, mainly due to the lack of budgetary resources. These aspects will be one of the issues to be addressed in South Korea, both in the short and long term.
This text provides general information. Statista assumes no liability for the information given being complete or correct. Due to varying update cycles, statistics can display more up-to-date data than referenced in the text.
Published by L. Yoon, May 25, 2022 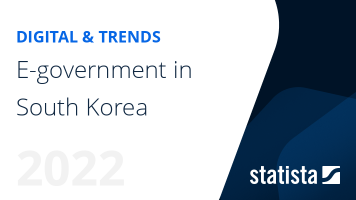 The most important key figures provide you with a compact summary of the topic of "E-government in South Korea" and take you straight to the corresponding statistics.