Indian clothing has evolved over the years. The influence of different empires and kingdoms, the emergence of Islam, and later, the British colonization of India had a significant impact on the attire of people. Following Independence, fashion in India became a major phenomenon. Indian designers have mastered the craft of embroidery and combined traditional and modern clothing to create standout designs. The Indian women’s apparel market was the sixth largest women’s apparel market in the world in 2020. In the domestic market, sales for women’s fashion amounted to over one billion Indian rupees in 2021.

Between tradition and modernity

Although there are regional differences in draping style, Indian sarees are the most widely worn by women. The saree is a traditional garment comprised of six yards of cloth but has been adapted into trendy new styles and fashions, making it much more than just a traditional dress.
Nevertheless, the salwar kameez, a comfortable dress-like cloth, combined with wide trousers and a long stole, dominated the country’s apparel market for women, especially during festivities or family functions such as weddings.
Although ethnic wear is usually the first choice for women, western wear such as activewear and t-shirts accounted for high growth rates, pushing the women’s apparel market in a different direction. The inflow of global western wear companies such as Zara, Westside, and Vero Moda created a new challenge for traditional retailers in India.

The retail of clothes in India has been traditionally organized into small family-owned stores selling a variety of patterns and styles which are purchased by means of a tough bargaining process. Products were often locally produced and mostly without a brand tag. With the expansion of malls, organized retail, and, the growth of the e-commerce sector, the share of unbranded clothes decreased, and branded clothes emerged as new growth drivers of the market.
The growth of branded websites including Biba and Fabindia increased significantly compared to online marketplaces such as Flipkart and Amazon. Overall, changes in the Indian retail structure and fashion preferences shaped and continue to influence the apparel market for women in the country.
This text provides general information. Statista assumes no liability for the information given being complete or correct. Due to varying update cycles, statistics can display more up-to-date data than referenced in the text.
Published by Statista Research Department, Aug 31, 2022

Share of market value of apparel India FY 2021, by type

Revenue of the women's apparel market worldwide by country 2021

Revenue of the women's apparel market worldwide by country 2021

Share of market value of apparel India FY 2021, by type 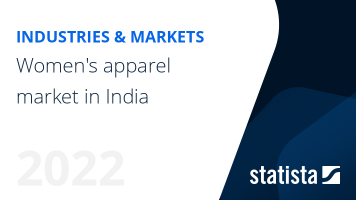 The most important key figures provide you with a compact summary of the topic of "Women's apparel market in India" and take you straight to the corresponding statistics.