Scope of the Call of Duty series

Call of Duty – familiar presence in PC and console gaming

With annual main series releases every fall, Call of Duty has become a mainstay in the PC and console gaming segment, regularly topping the charts until the next release is published. The main series originally focused on the World War II setting and later branched out with the Modern Warfare series and the Black Ops story arc, which have become the three narrative pillars of the Call of Duty universe. When looking at the most popular gaming genres Call of Duty’s popularity comes as no surprise: a global survey of gamers in the fourth quarter of 2020 found that shooter games were ranked as the second-most popular gaming genre, ranking only behind action adventure games.

Successful expansion into mobile and F2P

Call of Duty titles have been available on many platforms, but two recent releases have been making big waves in terms of popularity. The first is Call of Duty: Mobile, which was released at the end of 2019 as a free-to-play (F2P) title. The mobile game enjoyed great success in its opening months, amassing over 100 million downloads worldwide in the first two months after release. The title generated 4.49 million downloads in February 2022 and an approximate in-app revenue of 862 million U.S. dollars since release. Call of Duty: Mobile follows the current trend of incorporating a battle royale mode and is one of the top-grossing mobile battle royale shooters worldwide.

Mostly known as a premium franchise, the series’ cross-platform free-to-play (F2P) release Call of Duty: Warzone in March 2020 was also an immediate hit, generating more than 50 million downloads in the first month of release and currently claiming more than 100 million players. Warzone features three primary game modes: plunder, resurgence, and again, battle royale with up to 150 players in a single match.

Overall, the gaming industry as a whole has been boosted by the COVID-19 outbreak in 2020 and Call of Duty’s successful implementation of the current battle royale trend has helped the franchise reach new heights in terms of audience reach.

The most important key figures provide you with a compact summary of the topic of "Call of Duty (CoD)" and take you straight to the corresponding statistics. 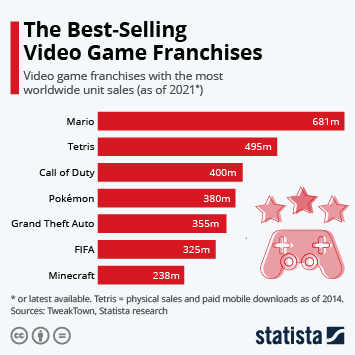