Tea is a popular beverage made from steeping plant material in hot water. In Japan, infusions using tea leaves represent the most important varieties for the consumer market, whereas herbal teas without tea plant materials include roasted barley tea (mugi-cha) and blends containing rice, flowers, and spices. Apart from loose leaves and tea bags for home-uses, the beverage is available as a warmed or cooled ready-to-drink (RTD) product. Bottled RTD teas are a commercial success in the Japanese non-alcoholic beverage market, surpassing popular segments such as RTD coffee and carbonates in sales.

Tea varieties consumed in Japan are mainly made from the leaves of tea plants, with the processing method determining the product type. Un-oxidized leaves are used for green tea products, whereas oxidized and half-oxidized leaves are processed into black and oolong tea, respectively. Limited by the size of the agriculture industry and the arable area on the archipelago, tea manufacturers supply the domestic market with a small share of oxidized teas, but the demand is predominantly covered by imports.
Instead, domestically produced leaves are mostly used in green tea production, with the intermediate products being graded according to the growing and processing methods. Lower graded products are sold as general tea to consumers or used in the production of RTD drinks. On the other hand, the young leaves at the tip of shade-grown tea shrubs are generally used in the production of high-quality gyokuro and tencha-type green tea, which represent the most expensive crude tea categories. In addition, the high-grade fine powder of ground Japanese tencha, commonly referred to as matcha, is an integral part of Japanese tea ceremonies. In contrast, low-grade matcha are deemed for culinary uses only and processed by food manufacturers.

The Japanese tea culture is traditionally associated with the meditative role of matcha-infusions in tea ceremonies. However, tea drinks are also frequently consumed as an ordinary beverage outside of ceremonial occasions. To consolidate their market positions and cater to different target groups, major beverage manufacturers have broadened their product ranges to include straight, flavored, and mixed tea drinks. Additionally, seasonal and limited editions released on an annual cycle complement the staple selection, resulting in more than 600 RTD tea variations being distributed in the Japanese market.
Besides their popularity as a hot or cooled drink, food trends are boosting the demand for tea in the archipelago. Combining Japanese food culture and imported sweets, matcha-flavor has long been established as a consumer favorite for a variety of desserts such as ice cream, pastries, and chocolate. Furthermore, imported trends such as the long-lasting bubble tea boom have been impacting the consumption of tea drinks and tea-like beverages, with social networking services driving the rapid circulation among young people.
This text provides general information. Statista assumes no liability for the information given being complete or correct. Due to varying update cycles, statistics can display more up-to-date data than referenced in the text.
Published by C. Diep, Apr 11, 2022 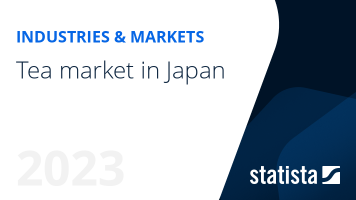 The most important key figures provide you with a compact summary of the topic of "Tea market in Japan" and take you straight to the corresponding statistics.