Baby and children's food market in the UK - statistics & facts

Ranked by number of users, Ella’s Kitchen, a company that produces organic baby and toddler food, was the leading baby and junior food brands in Great Britain in 2020. Other popular brands included Heinz and Organix. The UK imported over 113 million U.S. dollars' worth of infant and young child food preparations from Ireland in 2020, making Ireland the top import partner. Germany and the Netherlands ranked in second and third place that year, respectively.

The coronavirus pandemic altered what and where people eat all around the world. While babies and infants are not likely to have altered diets, given their specific nutritional needs and eating routines at this young age, some children in the UK experienced similar shifts in their food behaviors as adults. According to a recent survey, over 50 percent of parents stated that their children were eating more home-cooked meals during lockdown. Some children were also eating more comfort foods, such as ice creams, cakes, biscuits, and confectionery. Almost 70 percent of surveyed parents agreed that their children wanted to eat more snacks in general throughout the pandemic.

Children’s nutrition in the UK

Some 11 percent of boys and 15 percent of girls aged between two and ten were classified as overweight in the UK in 2019. Government initiatives, such as banning the sale of unhealthy snacks at supermarket check outs and restrictions on advertisements for junk food being shown in the daytime, were planned to combat these high figures. It is yet to be seen what impact such measures have on rates of obesity among children in the UK. The share of children with very low food security in the UK increased by three percent between 2019 and 2020. Having access to nutritious and balanced meals is a key component of food security; increasing levels of insecurity may, therefore, contribute to the prevalence of overweight and obese children in the UK.
This text provides general information. Statista assumes no liability for the information given being complete or correct. Due to varying update cycles, statistics can display more up-to-date data than referenced in the text.
Published by Emma Bedford, Sep 13, 2021

Market revenue of the baby food industry in Europe 2012-2025 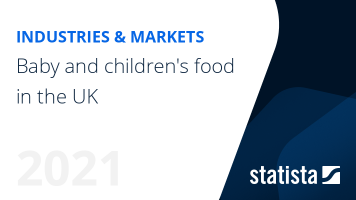 The most important key figures provide you with a compact summary of the topic of "Baby and children's food market in the UK" and take you straight to the corresponding statistics.