Kenya is one of the main tea exporters globally, after China and Sri Lanka. A sunny climate and deep reddish soil make for perfect conditions to produce tea in the East African country. In all of Africa, Kenya is by far the main tea producer. Unsurprisingly, the commodity plays a key role in the Kenyan economy. Together with coffee, mate, and spices, tea accounted for over 20 percent of the country’s exports in 2021.

Kenyan tea in the world

Tea produced in Kenya mainly supplies the international market. As of December 2021, the commodity was shipped to over 45 countries. Pakistan was the leading export destination, purchasing around 40 percent of the total tea exported. Egypt and the United Kingdom were also major markets supplied by Kenya. Overall, the tea trade generated 12.7 billion Kenyan shillings (roughly 108.2 million U.S. dollars) in earnings for the East African country that same month. In terms of volume, around 50 thousand metric tons of the product were exported.

Although still small in comparison to the exported volume, the domestic consumption of tea in Kenya has been increasing. In 2020, Kenyans bought a total of 40 million kilograms of the product. That represented a significant increase from nearly 19 million kilograms in 2010. Furthermore, by 2027, the consumption of black tea by Kenyans might reach some 57 thousand metric tons, according to projections. Consequently, the tea market revenue is also forecast to increase, jumping from 1.6 billion U.S. dollars in 2021 to 2.1 billion U.S. dollars in 2025.

Tea dominates the hot drinks retail industry in Kenya. However, this dynamic has been slowly changing, as the country has been experiencing a fast-rising coffee drinking culture. Similarly to tea, most of the coffee produced in Kenya is sold in the international market. Nevertheless, local consumption of coffee has been growing in recent years, mostly driven by the rise of the middle-urban class.
This text provides general information. Statista assumes no liability for the information given being complete or correct. Due to varying update cycles, statistics can display more up-to-date data than referenced in the text.

Volume of tea production in Kenya, by region 2022 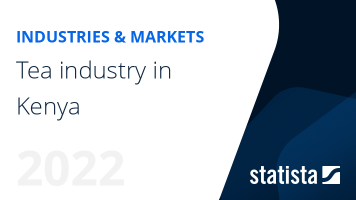 The most important key figures provide you with a compact summary of the topic of "Tea industry in Kenya" and take you straight to the corresponding statistics.

Tea in the world