With a history dating back several thousand years, traditional Chinese medicine (TCM) is one of the world’s oldest medical systems. Its origin remains uncertain, yet the earliest known written record of Chinese medicine is Huangdi Neijing (The Yellow Emperor’s Inner Classic) from the third century BC. Its long history and holistic approach, combined with the latest technology, makes TCM practices an important part of the healthcare system in China.

The foundation of TCM and its approach

TCM is based on the concept of qi, an energy that controls the movement of blood and flows along meridians in the body, which form a structured system like an electric circuit. In Chinese medicine, an excess or deficiency of qi can affect overall health. In this sense, TCM treatment seeks to maintain the balance of qi to prevent and heal diseases.

Major TCM remedies include herbal medicines, acupuncture (inserting thin needles into targeted areas of the body), tui na (Chinese massage), moxibustion (a form of heat therapy using dried plant materials called moxa), cupping (using a cup to pull an area of skin into a suction), and meditation exercises (i.e. taichi and qigong). While some people may argue that this ancient form of medicine is not scientifically based, many Chinese people consider the therapeutic approach effective and less invasive.

It comes as no surprise that TCM takes up a considerable part of the Chinese pharmaceutical market. Held within this trillion-yuan market segment are TCM patent drugs, medicinal materials, decoction pieces, formula granules, and various healthcare products. In recent years, TCM healthcare has become increasingly popular among China’s affluent consumers, reflected by its import value tripling between 2016 and 2019.

Notably, the Chinese government has announced policies to support the development of TCM and promote it in global settings. The priority is to protect and industrialize TCM herbs, as well as to promote TCM innovation and scientific research. Advanced technology is also playing a crucial role in TCM development. Industry experts predict that AI and big data will bring major breakthroughs in TCM diagnosis and research.
This text provides general information. Statista assumes no liability for the information given being complete or correct. Due to varying update cycles, statistics can display more up-to-date data than referenced in the text.
Wenyi Zhang
Research expert covering Greater China
Get in touch with us now
Published by Wenyi Zhang, Sep 26, 2022

Distribution of sales revenue in conventional pharmacies in China 2021, by product 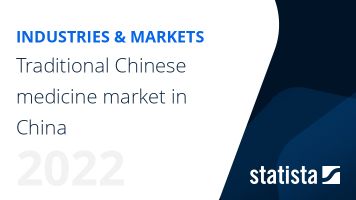 The most important key figures provide you with a compact summary of the topic of "TCM market in China" and take you straight to the corresponding statistics.