Italy, the Italian Republic, is a parliamentary republic and a democracy since 1946. The legislative power is in the hands of the Parliament, the executive power is exercised by the Council of Ministers, which is headed by the Prime Minister, while the judiciary power is independent from these two and led by the High Council of the Judiciary. The last two decades have been characterized by instable cabinets and changing governments. Ultimately, on January 26, 2021 Italy's Prime Minister Giuseppe Conte resigned as a result of an escalation of political instability in the country. Since February 13, Mario Draghi is the new Italian Prime Minister. Mario Draghi is a well-known figure in Europe. He was the President of the European Central Bank until 2019, Chair of the Financial Stability Board, and Governor of the Bank of Italy. Among others, he is considered the savior of the Eurozone for his work during the European debt crisis started in 2009. He has had high approval ratings since the start of his government.

Italy's most supported parties are Fratelli d'Italia, Lega, Democratic Party, 5-Star-Movement, and Forza Italia. Draghi's government joins the support of various large and small parties. After some initial controversies, the government also gained the support of Lega, Matteo Salvini's party and among one of Italy's most popular. Despite a general decrease in popularity, Lega has the support of about 20 percent of Italian voters. Lega is a right-wing party, whose platform involves anti-immigration policies, and criticisms to ethnic, cultural, as well as gender diversity in the country. Lega has made, in fact, a significant number of statements based on xenophobia and incitement to hatred, recorded as racial discrimination acts.

About 14 million Italians keep themselves updated on politics on a daily basis. On the other hand, a significant number of people do not inform themselves about any political topics. Some of the most common reasons for not staying informed about politics in Italy are lack of interest, as well as distrust of politics. Some other Italians, instead, actively participate in the political life on the country. For instance, the majority of people engaged in politics listen to political debates or participate in mass-meetings. Some other political activities widespread among Italians include discussing politics on the internet, taking part in political or party protests, and public demonstrations.
This text provides general information. Statista assumes no liability for the information given being complete or correct. Due to varying update cycles, statistics can display more up-to-date data than referenced in the text.
Published by Statista Research Department, Nov 22, 2022

Political participation in Italy 2020, by frequency 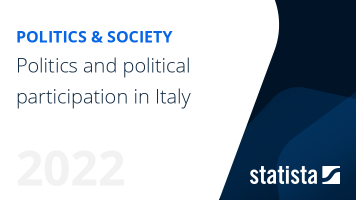 The most important key figures provide you with a compact summary of the topic of "Politics and political participation in Italy" and take you straight to the corresponding statistics.

Politics in the Netherlands
Discrimination in Italy