Africa and China have been strengthening their economical and political exchanges in the last decades. China has become a major trade partner as well as a reliable lender. On top of that, the country became a leading source of foreign investment in Africa, with Chinese enterprises operating on the continent. Additionally, the presence of Chinese immigrants in Africa has more than doubled between 2000 and 2019.

Africa-China trade on the rise

Goods and services trade between Africa and China has grown substantially. In two decades, the value of Chinese exports to African countries jumped from five billion U.S. dollars to 110 billion U.S. dollars. Africa’s young population, encouraged by rising consumer markets on the continent, has been driving the export of Chinese goods. At the same time, African exports to China also increased, though at a slower pace. In 2020, total export value to China reached nearly 62 billion U.S. dollars, a slowdown caused by the COVID-19 pandemic. The growing Chinese demand for raw materials has found a strong supplier in Africa, with exports valued at around 14 billion U.S. dollars in 2020.

Besides being one of Africa's major trade partners, China has increased its presence on the continent when it comes to investment. The Asian country is the largest foreign investor in Africa, a position first earned some years ago. In 2013, Chinese foreign direct investment (FDI) flow to the continent surpassed investments from the United States. Among industries, construction and mining were the major recipients of FDI, together receiving over 24 billion U.S. dollars in 2020, in alignment with strong Chinese participation in African infrastructure projects.

Roads, railways, power generation plants – most of the ongoing infrastructure projects in Africa have been receiving Chinese capital. As of 2018, China was the source of 25 percent of infrastructure funding on the continent. This was the second highest share registered that year, just behind financial commitments from national governments. Despite the support of infrastructure development, Chinese lending has been raising discussions regarding a possible contribution to Sub-Saharan Africa's debt burden, which increased to 702 billion U.S. dollars in 2020. However, although being recognized as the region's main bilateral lender, China still accumulates a far lower stake in Africa's external debt, when compared to multilateral creditors.
This text provides general information. Statista assumes no liability for the information given being complete or correct. Due to varying update cycles, statistics can display more up-to-date data than referenced in the text.

Mariam Saleh
Research Expert covering North Africa, specializing in the socio-economic environment of Algeria, Libya, Tunisia, and Morocco
Get in touch with us now
Published by Mariam Saleh, Sep 29, 2022 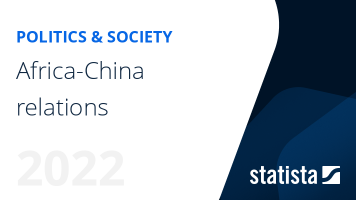 The most important key figures provide you with a compact summary of the topic of "Africa-China relations" and take you straight to the corresponding statistics.