The European advertising industry has been heavily impacted by the coronavirus crisis. The total advertising spending decreased during the pandemic when certain media saw lower to no usage, e.g cinema and out-of-home. Faced with the sudden changes to the promotional ecosystem, advertisers had to find solutions to reorient their content and face the challenges of this new, mainly digital era. The Benelux region is mostly following the same trend as Europe. Though often grouped together into one region, Belgium, the Netherlands, and Luxembourg have slightly differing advertising industries. In 2020, for example, Dutch advertisers focused their efforts on digital advertising, while Belgium and Luxembourg saw more ad investments in traditional media.

Based on advertising data for all three markets in Benelux, it is safe to say that the Netherlands leads in terms of advertising spending. Digital advertising seems to be the driving force behind the Netherland’s advertising sector, with ad spend on this channel amounting to more than half of total expenditures in 2020. At the same time, television, the second-largest medium in the country, saw ad spending barely surpass 700 million euros that year. Yet, despite the fact that Dutch consumers have a fairly low tolerance for digital advertising, the medium is forecast to see continued growth in the following years.

The ad market in Belgium

In Belgium, the advertising landscape is reversed compared to the Netherlands. Offline advertising is still prominent in the country, compared to online advertising which is currently the second largest medium. In fact, in 2020, television accounted for 32.2 percent of advertising expenditures in Belgium, while the internet took up 26.4 percent. Online advertising is forecast to see positive spending growth, with a peak of 11.5 percent in 2021. On the consumer side, the picture is clear - search engines are an important tool for brand discovery among Belgians. Additionally, quite a few of them use word-of-mouth, TV ads and product samples for that purpose, indicating that they prefer a the more traditional ways of learning about new brands.

Luxembourg is the country that differs most from its Benelux neighbors. The majority of its advertising investments were in the more traditional media, such as newspapers and radio. Spending on the two media amounted to close to 67 billion euros on 2020. Internet advertising ranked third in terms of ad investments in the country, with expenditures reaching 17 billion euros. Perhaps this phenomenon can be explained by the fact that consumers in Luxembourg distrust online media. In fact, over 90 percent of surveyed Luxembourgers said they tend not to trust social networks and close to 70 percent said the same about the internet. On the other hand, radio and TV were trusted by more than half of respondents.

Time will tell how the advertising industry in the Benelux will react after the coronavirus pandemic relaxes its grip and if the preferred media will remain the same as in 2020, or if a completely different approach will be taken.

A. Guttmann
Research Lead covering advertising and marketing
Get in touch with us now
Published by A. Guttmann, Oct 18, 2022

Advertising spending in Europe 2021, by region

Most effective advertisers in Europe 2021 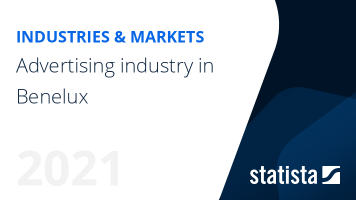 The most important key figures provide you with a compact summary of the topic of "Advertising in Benelux" and take you straight to the corresponding statistics.