Central America's telecommunications market has constantly been growing over the last decade. Despite the coronavirus (COVID-19) outbreak and its effects on industries worldwide, the market continues to expand, recovering after a slight slowdown at the beginning of the pandemic. It is estimated that the communication services market revenue in Central America will exceed eight billion U.S. dollars in 2022. The region’s most valuable segment is represented by mobile data, accounting for over 40 percent of the telco industry revenue in 2021.

Central America is going through a period of digital transformation in which mobile devices have become essential to many. Mobile phones have enabled millions of people to stay connected in regions where fixed broadband networks are limited or completely unavailable. This is particularly evident when looking at the telecommunications sector in Guatemala, where over 22 million connections are from mobile services. This has been supported by a rise in mobile device purchases, with the import value of cell phones in Guatemala increasing by 15.5 percent in the third quarter of 2021 compared to 2020. However, in the same time period, Panama’s import value of cell phones increased by nearly 65 percent – the highest among Central American countries.

The pandemic has forced people into their homes, resulting in noticeable changes to the telecommunications industry in Central America. Video call platforms have become the norm for work and school, while online entertainment and digital delivery platforms have soared in popularity and demand. While mobile services represent a significant share of the market in the region, fixed broadband services have also continued to grow as people continue to make the transition to working from home. The number of fixed broadband subscriptions in Central America  is forecast to surpass four million connections by 2024. In comparison, mobile cellular subscriptions  have plateaued at around 57.77 million and are expected to remain at a similar level over the next few years.

Although the telecommunications sector in Central America has had a promising development, the region continues to deal with several difficulties. Coverage and reachability are some of the biggest challenges in Central America, as constant technological development forces the market to adapt in order to satisfy the growing demand for communication services. One such example can be observed in rural communities, where areas suffer from limited broadband coverage due to a lack of infrastructure.
This text provides general information. Statista assumes no liability for the information given being complete or correct. Due to varying update cycles, statistics can display more up-to-date data than referenced in the text. 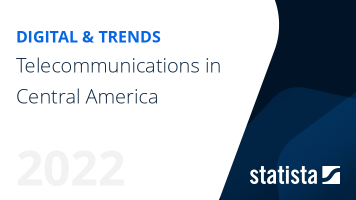 The most important key figures provide you with a compact summary of the topic of "Telecommunications in Central America" and take you straight to the corresponding statistics.