Published by Statista Research Department, Nov 25, 2022
The real estate industry is a key driver of the Philippine economy, generating gross value added of nearly 126 billion Philippine pesos as of the second quarter of 2021. Due to the growing middle-class population and the sustained remittances coming from overseas Filipino workers (OFWs), the purchasing and investing power of Filipinos in real estate properties had been gradually increasing in recent years.
The real estate market is comprised of two primary categories - residential and commercial properties. Residential properties include homes or apartments while commercial real estate is a broader category that covers office space, industrial, retail, and hotels and resorts.

Housing situation in the Philippines

Over the years, the Philippine housing market has been challenged by a housing shortage, especially in metropolitan cities. As in major cities in the Asia Pacific region, the exodus of households from rural areas left the demand for affordable housing at an all-time high. As a result, there has been a growing and constant demand for socialized to low-cost housing among low-income families. On top of that, the Philippines’ geographical location makes it susceptible to natural disasters, further challenging the country’s housing situation. This condition has been further hampered by the prolonged coronavirus (COVID-19) pandemic which brought uncertainties in the housing market. Most importantly, lockdown restrictions resulted in severe job losses in the service sector, especially among public transport drivers, leaving households unable to afford to pay rent.

To address the housing gap, government agencies, along with the private sector, adopted a resolution that would expedite the inventory of idle government lands and fast-track the development and releasing of socialized housing for the growing number of informal settlers. Measures to financially support the unemployed population during the pandemic have also been implemented.

Office real estate, on the other hand, was driven by increasing demand from Chinese and foreign investors, who continue to expand their presence not only in Metro Manila but also in other cities where production costs were lower. Overall, the demand for office space in the country during the second quarter of 2021 was driven by the IT-BPM sector. However, along with the residential market, this segment also reported increased vacancy rates, especially in Metro Manila, and pent-up demand due to the COVID-19 pandemic. This was largely due to the flexible working arrangements implemented by government offices and private firms occupying such properties which continued to drive down occupancy.

Despite this, the industry was forecast to recover in the following years, with Business Process Outsourcing (BPO) firms leading the comeback of office demand. Previously concentrated in Metro Manila, BPO firms have also started growing their presence in the provinces of Iloilo and Cebu. In fact, in 2020, the city of Iloilo accounted for the highest office space occupancy across the industry.

In the following 5 chapters, you will quickly find the 34 most important statistics relating to "Real estate industry in the Philippines". 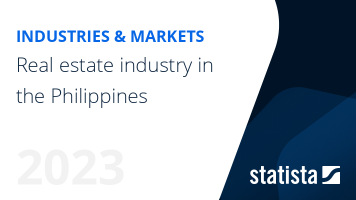 The most important key figures provide you with a compact summary of the topic of "Real estate industry in the Philippines" and take you straight to the corresponding statistics.

Ownership of house and lot