Racial and ethnic health disparities in the U.S. - Statistics & Facts

Health disparities refer to measurable differences in the ability to achieve full health potential that exist between population groups. Although the United States, as a Western developed country, generally has a high quality of life and health, there are stark inconsistencies in types of and risks for health conditions, disabilities, and mortality based on race or ethnicity, as well as inequalities in access to and use of health care services. These differences are caused by persistent systemic and structural inequalities within the interconnected economic, social, political, and health systems in the United States. Lack of access or use of the health care system directly affects minority populations, leading to ethnic and racial disparities in health status and key health outcomes. Sources for disparities can include geographical differences, lack of access or resources, communication difficulties, prejudice by the providers, inadequate funding, and cultural barriers. In 2018, around 29 percent of the American Indian/Alaska Native population under 65 years of age lacked health insurance, compared to about 17.6 percent of the white population.

Disparity in diseases and risks

The health burden in the U.S. is vastly influenced by non-communicable diseases, the stratification of which also reflects ethnic disparities. For example, although an alarming 31 percent of the total U.S. adult population is obese, obesity rates are much higher among the Black population, reaching over 40 percent in 2019. This, in turn, contributes to the higher prevalence of cardiovascular disease among non-Hispanic black men and women seen in recent years. Other behaviors related to deleterious health outcomes differ by race and ethnicity as well: current use of alcohol is highest among the white population, while smoking is most common among non-Hispanic American Indians/Alaska Natives and least common among non-Hispanic Asians.

All ethnicities and races share common threats to life, as the high rates of cancers and cardiovascular disease are a modern, worldwide phenomenon. However, due to ongoing disparities in resources, access, and use of prevention and treatment strategies, there are differences in the ultimate outcomes of health conditions in the United States. In 2019, the death rate for HIV was highest among Black and African American individuals, reaching 16.1 deaths per 100,000 population compared to 2.5 per 100,000 among white individuals. Moreover, the rate of overdose deaths related to opioid use among White citizens reached 19 per 100,000 population and around 17 per 100,000 among the Black, non-Hispanic population during 2019, compared to 8.8 deaths per 100,000 among Hispanics.
This text provides general information. Statista assumes no liability for the information given being complete or correct. Due to varying update cycles, statistics can display more up-to-date data than referenced in the text.
Published by Statista Research Department, Sep 27, 2021

Ethnicity with the highest prevalence of diabetes
Hispanic/Latino

Ethnicity with the highest death rates from cancer
Non-Hispanic black

Percentage of U.S. population without health insurance coverage by ethnicity 2018

Adult obesity rates in the U.S. by race/ethnicity 2021

Leading causes of death among Hispanics in the U.S. 2019 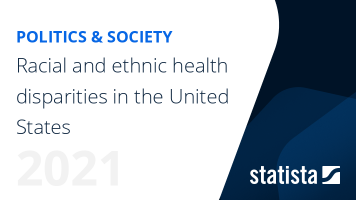 Go to report Racial and ethnic health disparities in the U.S.
Top Seller

The most important key figures provide you with a compact summary of the topic of "Racial and ethnic health disparities in the U.S. " and take you straight to the corresponding statistics.