With a relatively small domestic consumer market of around 23.8 million residents, the economy in Taiwan is highly reliant on its import-export sector. In 2020, Taiwan exported goods and services with a total value of more than 345 billion U.S. dollars, accounting for more than 50 percent of its gross domestic product that year. Globally, Taiwan has been a significant trading hub, which ranked 15th among all economies in terms of export value in 2020, and is also one of the eight nations or regions with the highest trade surplus.
Taiwan has a handful of advantages when it comes to conducting regional and international trade. Geographically, Taiwan is located on the Western Pacific Maritime Trade Route, which connects East Asian nations with the vast Southeast Asian market. Politically, the authority has published a number of favorable trade policies. Diplomatically, long-standing strategic and economic partnership made Taiwan one of the leading trade partners for the United States.

As the world's second-largest electronic circuit component exporter and the fifth-largest semiconductor device exporter, Taiwan has taken a crucial position in the global hi-tech supply chain. In 2020, the export value of integrated circuits from Taiwan amounted to nearly 3.4 trillion New Taiwan dollars, making up more than 35 percent of Taiwan's exports in goods that year. Mainland China, Hong Kong, and Singapore are the three leading destinations for integrated circuit produced in Taiwan. Other than the long-standing trade partners such as the United States and mainland China, the government has been working on enhancing its trade relationship with Southeast Asia, South Asia, and Australasia since 2016. As of 2020, ASEAN has surpassed the United States to become the second-largest trade partner of Taiwan.

Meanwhile, Taiwan exported over 50 billion U.S. dollars worth of commercial services in 2019, of which nearly 30 percent were contributed by travel services. Taiwan is one of Asia's most popular tourist destinations, attracting more than ten million international visitors each year. Mainland China, Hong Kong and Macao, and Japan were three of the leading sources for visitors to Taiwan.

Lacking natural resources, Taiwan relies on imports for its raw material needs. In 2020, agricultural products and industrial materials accounted for nearly two-thirds of the total goods imported to Taiwan. Resulting from its geographical location and historical ties, mainland China has been Taiwan's largest import partner for decades. Regardless of several trade disputes in recent years, the total import value from mainland China to Taiwan has grown steadily.

Furthermore, Taiwan is one of the leading destinations for regional and global foreign direct investment as well. In 2020, Taiwan recorded an FDI inflow of around 8.8 billion U.S. dollars, of which about 5.9 billion U.S. dollars were from mainland China.
This text provides general information. Statista assumes no liability for the information given being complete or correct. Due to varying update cycles, statistics can display more up-to-date data than referenced in the text.

Yihan Ma
Research expert covering e-commerce and FMCG in Greater China
Get in touch with us now
Published by Yihan Ma, Dec 15, 2021

Value of goods imported to Taiwan 2021, by origin

Total exports from Taiwan 2021, by category 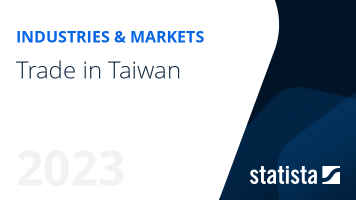 The most important key figures provide you with a compact summary of the topic of "International trade in Taiwan" and take you straight to the corresponding statistics.

Trade in services and capital