Published by
Christina Gough,
Nov 2, 2021
Sport in Canada consists of a wide variety of activities, from Canada’s two national sports - ice hockey and lacrosse - to other team sports such as football and soccer. Canada’s large land area and relatively cold winters contribute to the popularity of these outdoor field sports and winter activities, which also include skiing, and snowboarding. The market size of the ski and snowboard resorts industry in Canada alone has remained over one billion U.S. dollars for years. Recently, eSports, which refers to video games and competitions played online in teams or individually, have also become an important sector in the overall sports market. The sports market size in all of North America has increased over the last decade, and prior the coronavirus (COVID-19) pandemic, this was forecast to reach over 83 billion U.S. dollars by 2023.

The sport is extremely popular among Canadians, with nearly half of surveyed Canadians stating they are fans of at least one Canadian National Hockey League (NHL) team. The NHL is the professional league for ice hockey in North America and the Canadian teams with the most self-reported fans are the Montreal Canadiens and the Toronto Maple Leafs. The two franchises also happen to be the two NHL teams with the most Stanley Cup wins. In terms of team revenue, both the Toronto Maple Leafs and the Montreal Canadiens had a peak revenue of around 243 million U.S. dollars in the 2018/19 season. However, the Toronto Maple Leafs’ revenue has grown more quickly in recent years, likely owing to the team being based in Toronto, by far Canada’s largest and most populous city.

The rise of eSports in Canada

With the growing speed and availability of the internet, eSports have started to make an impact on the sports industry. Though the United States is home to most of the world’s professional eSports competition players, active eSports competition players in Canada numbered nearly 600 in 2020. There are many different genres of eSports games, from sports games such as Rocket League to multiplayer battle area games like League of Legends. The eSports game genre that Canadian fans prefer most is sports games, followed by first person shooters, real-time strategy, and racing games. For fans who want to watch these multiplayer video game competitions, the most popular source for streaming eSports in Canada is sports broadcaster websites, though a significant amount of fans also used YouTube Gaming or Twitch streaming services.

In the following 5 chapters, you will quickly find the 40 most important statistics relating to "Sport in Canada". 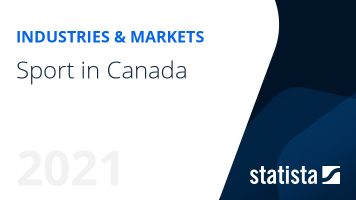