The tobacco industry involves the manufacture and sale of all products made from smokable and non-smokable tobacco. Smokable tobacco products are cigarettes, cigars, and loose tobacco for rolled cigarettes, pipes, and water pipes. Non-smokable tobacco products include chewing tobacco, snuff, and snus- Swedish moist snuff tobacco. Also, the latest tobacco innovations such as vaping and e-cigarettes are becoming increasingly important for the market.
In 2020, the tobacco product market in the Nordic countries generated a revenue of around 7.1 billion U.S. dollars and is expected to continue to grow, reaching approximately 8.5 billion U.S. dollars in 2025. As of 2021, revenues from the cigarettes segment accounted for the largest part of the market’s revenue. Cigarette sales were ahead of smoking tobacco, e-cigarettes, and cigars. The price per cigarette was highest, closely followed by cigars. By comparison, smoking tobacco products are significantly cheaper.

Swedish Match AB manufactures and sells brands in the product segments smoke-free, cigars, and light cigarettes. The company is headquartered in Stockholm, Sweden and its production is located in seven countries, with the US and Scandinavia as the largest markets. From 2014 to 2020, sales of Swedish Match increased and peaked by the end of the period at approximately 16.7 billion Swedish kronor. More than half of the total company sales come from the product segment smoke-free, amounting to roughly 10.7 billion Swedish kronor in 2020.

According to a survey, smoking was generally more common among men than women in Denmark. In 2020, the share of male smokers was 21 percent, while that of female smokers was 15 percent. That year, light cigarettes seemed to be the most common type of cigarettes used by Danish smokers, followed by home-rolled, menthol, as well as double filter cigarettes. By comparison, smokeless tobacco was not that common – 95 percent of respondents stated to have never used it.
In Norway, the share of daily and occasional smokers showed an overall decreasing tendency in recent years. According to a survey, nine percent of adult respondents were daily smokers, and eight percent were occasional smokers in 2020. When it comes to smokeless tobacco, although the shares of snus users were lower, they showed a rising tendency during the same period.
The neighboring country Sweden experienced a similar development– the share of daily smokers decreased and amounted to seven percent as of 2020. The non-smokable tobacco product snus seemed to be more popular among consumers: while the number of cigarettes consumed in Sweden stayed quite stable, the amount of snus consumed increased overall.
This text provides general information. Statista assumes no liability for the information given being complete or correct. Due to varying update cycles, statistics can display more up-to-date data than referenced in the text.
Published by M. Ridder, Nov 16, 2021

Revenue growth of cigarettes market in the Nordics
0.5%

Revenue growth of the tobacco products market in the Nordics, by segment 2015-2027

Tax per kilogram on fine smoking tobacco in Denmark
1550.9 DKK

Taxes on tobacco products in Denmark 2022

Tax per kilogram on smoking tobacco in Sweden
1997 SEK

Taxes on tobacco products in Sweden 2022

Revenue growth of the tobacco products market in the Nordics, by segment 2015-2027

Price per unit in the tobacco products market in the Nordics, by segment 2014-2027 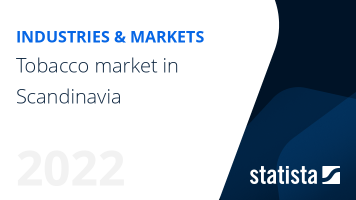 The most important key figures provide you with a compact summary of the topic of "Tobacco market in Scandinavia" and take you straight to the corresponding statistics.