Published by Statista Research Department, Jun 13, 2022
Germany provides clear definitions of vegan and vegetarian for consumers and producers alike. Vegan products do not include any components of animal origin, also not during manufacturing and processing. Vegetarian items, while not being products of animal origin either, may contain milk, foremilk, farm poultry eggs, bee honey, beeswax, propolis or wool grease from wool off living sheep during production. Both terms relate not only to food items, but also to other consumer goods which traditionally involved using animals.
According to a recent survey, consumers did not eat meat for different reasons. Mainly these were connected to wishing to contribute to sustainability, animal welfare and own health. Powerful motivators are decreasing the necessity for what is viewed as questionable and environmentally harmful practices in (traditional) food production through non-consumption of products which come from animals. Similar reasons were recorded for not eating dairy products, though lactose intolerance was also cited.

Consumer perceptions of a meat-free diet likewise varied. Based on a survey conducted in Germany, most respondents tended to agree that alternatives to milk, cheese, and meat were overpriced, which is significant, considering that these products are diet staples. Other consumers also thought meat-free eating led to vitamin and nutritional deficiencies in general. At the same time, there was agreement with positive statements, such as vegan and vegetarian eating contributing to solving environmental problems and preventing widespread diseases.

It certainly seems as if vegan and vegetarian lifestyles are becoming increasingly mainstream in Germany, however, some consumers still had reservations. Another survey revealed that around 30 percent of both men and women mostly could not imagine living as a vegetarian or vegan, even if more convincing non-animal substitute products were available on the market. Among those consuming meat substitute products in Germany in 2021, 1.6 million did so several times a week and 2.5 million did so once a month.

In the following 4 chapters, you will quickly find the 38 most important statistics relating to "Veganism and vegetarianism in Germany". 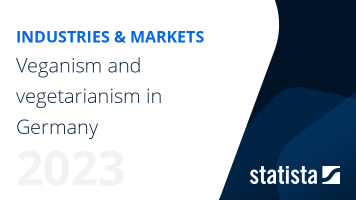 Go to report Veganism and vegetarianism in Germany
Top Seller

The most important key figures provide you with a compact summary of the topic of "Veganism and vegetarianism in Germany" and take you straight to the corresponding statistics.