The television industry marks the zenith of the media and entertainment sector’s performance in India. The television itself has become a quintessential fixture in most Indian households having evolved in shape, size, and technology over the years. By 2021, the country’s television market had steadily grown into a multibillion-dollar industry catering to a subscriber base that ran into the millions.

Among the different pay TV formats, the direct-to-home (DTH) segment has been an active driver of pay TV penetration nationwide. In fact, more than half of pay TV subscriptions in India are digital as opposed to analog. With over 900 satellite channels to choose from, some of the country's leading DTH operators were Tata Sky and Airtel. Meanwhile, the government-led DD Free Dish initiative was launched in 2004 to encourage the mass adoption of direct-to-home services and was India's first and only free-to-air (FTA) DTH service. This required subscribers to only pay a one-time investment for the installation of a set-to-box and dish antenna without a monthly subscription.

Cord-cutting and the rise of OTT services

Much like countries such as the United States, the Indian pay TV market is no stranger to the trend of cord-cutting. India's OTT and video streaming market raised a revenue of over two billion U.S. dollars in 2020. One of the leading reasons stated by Indians for subscribing to video streaming services was the variety of content offered in comparison to cable and satellite TV. Despite the growing popularity of platforms such as Netflix and Amazon Prime Video, market experts remain optimistic about the potential of the pay TV industry as Indian households continued to subscribe to these services. Moreover, critics of the cord-cutting trend have warned that the switch has led to OTT and video streaming becoming more expensive. This was also the primary reason provided by Indians for discontinuing their video streaming subscriptions.
This text provides general information. Statista assumes no liability for the information given being complete or correct. Due to varying update cycles, statistics can display more up-to-date data than referenced in the text.
Tanushree Basuroy
Research expert covering India
Get in touch with us now
Published by Tanushree Basuroy, Dec 7, 2021

Value of the television distribution market in India 2016-2023

Value of the television distribution market in India 2016-2023

Switch to OTT and VoD services 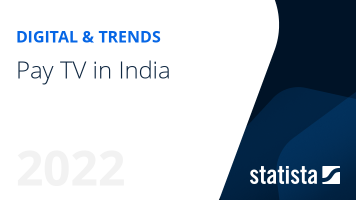 The most important key figures provide you with a compact summary of the topic of "Pay TV in India" and take you straight to the corresponding statistics.