Published by Statista Research Department, Jun 10, 2022
As an archipelago with more than 17,000 islands and a population of more than 260 million people, Indonesia’s passenger transport is essential for its economic activity and population movements. Its infrastructure development budget has also seen a significant jump in the past few years. Indonesia is now at the beginning of a shift from car-centered planning and development to people-centered mobility, slowly reclaiming its public space and expanding its connectivity.

Out of all modes of passenger transport, road transport is predominant in Indonesia. With a rising population in urban areas, Indonesia has also experienced a growth in the number of vehicles that comes along with more pollution, traffic congestion, and road fatalities. In 2020, Indonesia’s total road length reached around 545 thousand kilometers with 80 percent classified as city roads. Utilizing the fact that passenger transport in Indonesia has been dominated by cars and motorbikes, ride-hailing service companies such as Gojek and Grab have soared in recent times. Indonesia’s largest taxi company, Bluebird, also teamed up with Gojek to revolutionize urban transport in Indonesia.

It has not been long since Jakarta, Indonesia’s capital city, began developing the country’s first integrated public transportation. Starting with its first bus rapid transit system TransJakarta in 2004 and the Mass Rapid Transit (MRT) Jakarta system in 2019, Indonesia has been aiming to ease traffic congestion in the capital city. MRT Jakarta’s final construction works are planned to be completed by 2022. Until then, vehicle traffic near these construction areas remains affected.

Sea transport is essential for Indonesia’s inter-island connectivity and economic integration. Indonesia’s main islands are well connected by both government- and privately-owned ferries. Compared to sea transport, inland waterways play a relatively minor role and are limited to certain areas of Eastern Sumatra, Papua, and Kalimantan. However, as there are no proper roads on these islands yet, traveling by boat is the only way to reach many places within.

For decades, Indonesia has been heavily focusing on its passenger transport across Java Island since more than 50 percent of Indonesians reside here. Finally shifting its focus to other main islands, in 2012, the Indonesian government planned to build toll roads and railway networks that connect cities across other main islands such as Sumatra, Sulawesi, and Papua. The Trans-Sulawesi Railway and Trans-Papua Highway projects are now in progress to be completed and are expected to start operating in the near future.

In the following 8 chapters, you will quickly find the 41 most important statistics relating to "Passenger transport in Indonesia". 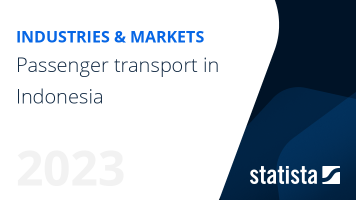 The most important key figures provide you with a compact summary of the topic of "Passenger transport in Indonesia" and take you straight to the corresponding statistics.