A strong love for fashion is inextricably rooted in the history of the United Kingdom. From British royalty influencing commoners with their outfits to the cultural revolution of the 1960s that catapulted British styles worldwide, UK fashion is constantly undergoing transformation. Among the latest developments shaping the fashion world is e-commerce. In 2022, online sales of apparel, shoes, handbags, and accessories would collectively account for close to a third of e-commerce revenue in the United Kingdom, amounting to over 60 billion U.S. dollars. In the same year, more than 45 million Britons bought apparel over the internet, a figure forecast to grow to nearly 50 billion by 2025.

E-commerce has become an attractive shopping alternative in the UK for those looking to renew their wardrobes at the tips of their fingers. However, this practice is still not everyone's cup of tea. In 2021, almost half of fashion shoppers in the UK completed their purchases in physical stores, either after first browsing online or heading straight to the store. For most British consumers, online shopping is an add-on option rather than a replacement for brick-and-mortar shopping. The latter is especially true for younger consumers, namely Gen Z and millennials, as about 60 percent of respondents within these generations reportedly used a hybrid model to shop for fashion, buying both online and in-store. However, Gen Z and millennial shopper still made up the highest share of UK consumers shopping for clothing and shoes online in 2022, showing increasing interest in e-commerce over their older counterparts.

Crowned alongside Milan, New York, and Paris as one of the world's fashion capitals, London is home to the best-known British designers and brands. This influence seems to have carried over into the digital world, with London-based ASOS and Marks & Spencer ranking as the most visited fashion and apparel websites in the UK in 2022. Even so, online retailers have sprung up across the country. The well-known Boohoo group, headquartered in Manchester, operates under seven brands—including PrettyLittleThing and NastyGal. Despite scandals over environmental and worker violations since mid-2020, and an 80-million-British-pound false advertising lawsuit settled by the company in 2022, Boohoo’s popularity among consumers has not yet suffered extreme backlash. In terms of online visibility, Boohoo’s website, boohoo.com, still ranked among the UK’s fashion websites with the largest shares of voice in the same year. Leading in this ranking was Next, followed by ASOS and e-commerce giant Amazon.
This text provides general information. Statista assumes no liability for the information given being complete or correct. Due to varying update cycles, statistics can display more up-to-date data than referenced in the text.
Published by Statista Research Department, Oct 13, 2022

Fashion e-commerce users in the United Kingdom 2017-2025, by segment

Fashion e-commerce users in the United Kingdom 2017-2025, by segment 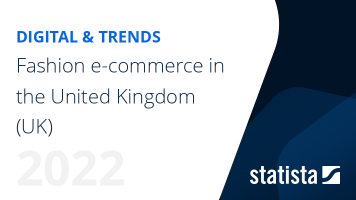 The most important key figures provide you with a compact summary of the topic of "Fashion e-commerce in the United Kingdom" and take you straight to the corresponding statistics.