Published by
Thomas Alsop,
Sep 13, 2022
Snapdragon is the name given to a suite of system-on-chip (SoC) integrated circuits designed by the American fabless semiconductor company Qualcomm. The firm designs and markets digital wireless telecommunications products and services, and is recognized for developing processors, connectivity solutions, displays, software, and charging products. Qualcomm’s technologies are used in smartphones, wearables, and other mobile devices, as well as for automotive and industrial applications. The company is a leading contributor to innovations and inventions concerning wireless technologies, notably 5G, Bluetooth, and Wi-Fi 6, as well as having specialties in other technologies used across the wireless ecosystem, including AR/VR and device charging features.

An SoC is an integrated circuit that combines all the major functional components of the computer on one IC or microchip. SoCs typically integrate the central processor, graphics, and memory, and are commonly found in smartphones, tablets, wearables, and other IoT devices. As an SoC integrates software at the hardware level, it uses less power, has better performance, and requires less space due to very-large-scale integration (VLSI) - hence their popularity within modern-day smartphones and other mobile devices. Snapdragon products feature in devices from manufacturers such as Samsung, Xiaomi, Vivo, and Oppo, to name but a few.

The first Snapdragon SoC was announced in November 2006, with the name chosen because "Snap and Dragon sounded fast and fierce”. The earliest Snapdragon products were released in 2007, with 15 device manufacturers deciding to embed Snapdragon semiconductors in their consumer electronics products within the first year of the SoCs being released. Over time, the adoption of Snapdragon products has increased significantly, with Snapdragon chips now the most ubiquitous SoCs in the Android smartphone space. Snapdragon chips range across the 8, 7, 6, 4, and 2 product families, from high-end to low-end, respectively, as well as Wi-Fi and mobile charging products.

In the following 5 chapters, you will quickly find the 35 most important statistics relating to "Snapdragon". 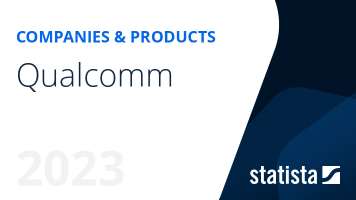 The most important key figures provide you with a compact summary of the topic of "Snapdragon" and take you straight to the corresponding statistics.