Published by
Nils-Gerrit Wunsch,
Dec 9, 2021
Veganism is still a lifestyle that very few consumers follow. However, forgoing meat and all forms of animal food products is becoming more popular. Signups for Veganuary, a campaign that challenges its participants to only eat vegan for January, have been increasing since 2015 to reach over 500,000 Veganuary participants for the most recent outing of the campaign. Looking around the globe, there are huge differences from country to country in the share of vegans. India is the leading nation by share of vegans. A total of nine percent of the Indian population are vegans. In even the most developed Western markets this figure only reaches two to three percent, while in many countries in Europe only around one percent of the population is vegan. Vegetarianism shows a similar picture. India leads all other countries with a share of almost a quarter of Indians following a vegetarian lifestyle.

The global market for vegan and plant-based products

Vegan or plant-based products are not only for those who try to avoid eating meat and animal products - they have a much larger target audience. This is especially true for meat substitutes. Pat Brown, the founder of Impossible Foods, even sees vegetarians as the wrong audience for these kinds of meat replacements, which are specifically designed to imitate meat despite being plant-based. As such, meat substitutes are targeted at meat eaters, making the transition to a plant-based diet much easier for them. Impossible Foods is among the biggest alternative protein companies in the world. It has a vast market to operate in which is only expected to be growing. The global vegan food market and the overall worldwide plant-based food market have reached values of 15.8 billion and 35.6 billion U.S. dollars, respectively.

In the following 6 chapters, you will quickly find the 35 most important statistics relating to "Veganism and vegetarianism worldwide".

The most important key figures provide you with a compact summary of the topic of "Veganism and vegetarianism worldwide" and take you straight to the corresponding statistics. 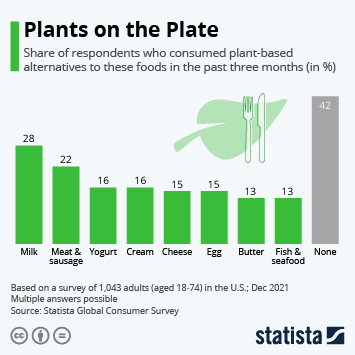