Published by
Lionel Sujay Vailshery,
Feb 7, 2022
As the first company to successfully commercialize the virtualization of the x86 microprocessor architecture, VMware is a market leader in the virtualization market, offering application software solutions that can run independently from the underlying hardware. Founded in 1998 in Palo Alto, California, the cloud computing and virtualization company is now 23 years old. After being acquired by EMC, and subsequently, Dell Technologies after Dell acquired EMC, VMware was spun off from Dell in November 2021, becoming independent again.

VMware‘s virtualization solutions, most notably the hypervisors, allow customers to run applications in their own operating systems on the same physical server and enable more efficient use of computer hardware. VMware‘s virtualization technology is being widely adopted in the cloud computing space: cloud providers like Amazon, Microsoft, and IBM all have partnerships with VMware, allowing their customers to run VMware workloads natively on their cloud. VMware’s virtualization tools are now a crucial part of many companies IT infrastructure.

VMware’s businesses are divided into three major segments: Licenses, Subscription and SaaS, and Services. The Services segment brings in the most revenue, amounting to over six billion U.S. dollars in the company’s 2021 fiscal year. VMware’s more traditional software licensing businesses are slowly giving way to cloud-based product offerings, with its Licenses segment recording a revenue decrease in the latest fiscal year, whereas the Subscription and SaaS segment has been rapidly growing. Over the years, the company’s total revenue has slowly increased, peaking at 11.8 billion U.S. dollars in the fiscal year 2021.

VMware’s vSphere is the market-leading virtualization technology, with a share of over 12 percent. Microsoft’s Hyper-V, with a share of almost 11 percent, is VMware’s biggest competitor. Another VMware offering, the ESX Server, is also a popular product, falling just behind Hyper-V. VMware is also the market leader in the cloud systems management market with a share of around 20 percent, ahead of competitors such as Microsoft and IBM.

In the following 4 chapters, you will quickly find the 25 most important statistics relating to "VMware". 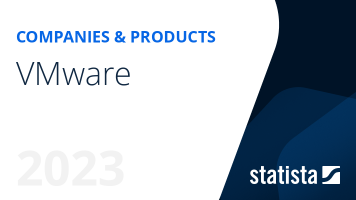 The most important key figures provide you with a compact summary of the topic of "VMware" and take you straight to the corresponding statistics.