Non-alcoholic beverages and soft drinks in the UK - statistics & facts

While the value of the non-alcoholic drinks market in the United Kingdom is comparatively small, it is still one of the largest in the world. In 2020, the market was valued at 13.6 billion GBP. This represents a significant decline from the pre-pandemic value of 15.2 billion pounds. Carbonated soft drinks are, by far, the largest segment of the market, accounting for 38 percent of sales. After years of continual growth, the value of the segment declined by 16 percent in 2020. Despite the overall market downturn, two segments managed to makes gains in 2020. Dilutables (drink mixes) grew by over nine percent to 830 million pounds and fruit juices were valued at 1.6 billion pounds, an increase of about three percent.

In total, over 13.5 billion liters of non-alcoholic beverages were consumed in the UK in 2020, a declined of 2.3 percent compared to 2019. Per capita consumption also declined by roughly two percent. Weekly household expenditure on non-alcoholic drinks follows household income, with the top earning households spending roughly eight pounds per week while the lowest income earners spent only three pounds. The consumer price index for non-alcoholic beverages also increased by two percent in 2020.
This text provides general information. Statista assumes no liability for the information given being complete or correct. Due to varying update cycles, statistics can display more up-to-date data than referenced in the text.
Published by M. Ridder, Jan 12, 2022 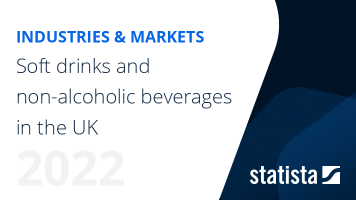 The most important key figures provide you with a compact summary of the topic of "Non-alcoholic beverages and soft drinks in the United Kingdom" and take you straight to the corresponding statistics.