Published by
Shangliao Sun,
Dec 1, 2022
Reliance Jio Infocomm Limited, popularly known as Jio, is an Indian telecommunications provider. It is a subsidiary of Reliance Industries, the biggest corporation in India, which was ranked 155th on the Fortune Global 500 list as of 2021. Jio was publicly launched on September 5th, 2016, with 4G services, and soon became the leading mobile telecom provider in India. As of March 2022, despite the impact of the coronavirus on the national economy, Jio held more than one third of the wireless subscriber market.

India’s telecommunications market is the second largest in the world, just behind China, with a subscriber base of over 1.1 billion at the end of 2020. Meanwhile, since 2010, the smartphone penetration rate saw steady growth in India and reached more than 54 percent in 2020. Strong demand, and favorable government policies have been instrumental to the development of the industry. The Indian government has increased the FDI cap of the sector from 74 percent to 100 percent in 2020 to attract more foreign investments. Meanwhile programs like “Digital India” and “Make in India” also helped to boost digitalization and production in the telecommunications sector.

Increasing purchasing power and relatively cheap internet have helped the Indian smartphone market to grow into the second biggest in the world. The most popular smartphone brands in the country are Xiaomi, Samsung, and Vivo. To boost localized and domestic phone manufacturing, the Indian government introduced a production linked incentive scheme for large scale electronics manufacturers. However, the coronavirus pandemic has hampered the growth trend of smartphone shipments in India, and the continued supply chain related challenges might prolong the negative impact.

In the following 4 chapters, you will quickly find the 24 most important statistics relating to "Reliance Jio". 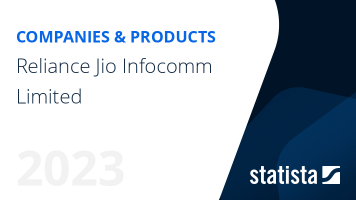 The most important key figures provide you with a compact summary of the topic of "Reliance Jio" and take you straight to the corresponding statistics.