The toy industry in the United Kingdom is an important and lucrative market, growing steadily every year. The revenue of the toys and games market grew significantly in recent years, going from approximately 4.9 billion British pounds in 2013 to over 7.1 billion in 2021. The toys industry includes different segments with different target markets, from toys intended for toddlers and kids to more complex games targeting adults like card games and board games. In 2020, video game consoles were the most lucrative segment in the toy industry in the UK, with revenues in that segment alone exceeding two billion British pounds.

The rise of e-commerce in the UK toy industry

The pace of digitalization of the economy definitely picked up speed with the onset of the coronavirus pandemic in 2020. Online sales channels in the toys and games market in the UK have enjoyed a marked increase in revenue share since 2017 and are expected to overtake offline sales channels by 2024. In 2021, Smyths Toys, Waterstones, and LEGO had the highest online visibility scores among toy retailers in the UK. Popular for its interlocking plastic bricks, LEGO was the leading toy company in the world in 2020. Despite the rise of e-commerce, the number of brick-and-mortar stores for the retail sale of games and toys continued to increase in the last decade in the UK.

Toy expenditure in the UK

Consumer spending on toys more than doubled between 2005 and 2020, with growing consumer demand driving a significant increase in the purchase volume of games, toys, and hobby goods in the United Kingdom. In 2020, more than 23 billion British pounds worth of games and toys and other items related to hobbies were purchased by households in the UK, up from around 10.6 billion British pounds in 2005. Average weekly household expenditure on games, toys, and hobbies varied widely between gross income deciles in the UK, with the highest ten percent gross income decline group spending an average of six British pounds per week on toys, versus only 0.8 British pounds spent by the lowest ten percent.
This text provides general information. Statista assumes no liability for the information given being complete or correct. Due to varying update cycles, statistics can display more up-to-date data than referenced in the text.

D. Tighe
Research expert covering shopping behavior, sports and leisure retail, and the subscriptions and direct selling industry
Get in touch with us now
Published by D. Tighe, Jan 12, 2022

Number of games and toys manufacturers in the UK
684

Games and toys: manufacturing enterprises in the United Kingdom (UK) 2008-2020

Revenue of the toys for toddlers and kids segment in the UK
1.38bn GBP

Toy & games market revenue in the United Kingdom 2020, by segment 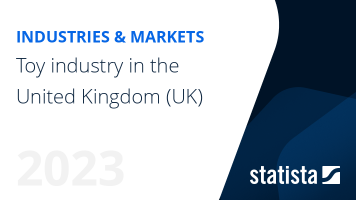 The most important key figures provide you with a compact summary of the topic of "Toy industry in the UK" and take you straight to the corresponding statistics.