The holiday season is an exciting time in the Netherlands: from enjoying seasonal candy to receiving gifts from either Sinterklaas or Santa Claus, there are many festive moments to look forward to during this time of year. The holiday season is also of vital importance to most retailers, as sales figures tend to reach their annual peaks during those late autumn and early winter months. In 2021, total Christmas consumer spending in the Netherlands was estimated to reach 12.8 billion British pounds, which is nearly the same total amount that was spent one year prior.

One very common habit in the Netherlands around Christmas time is that of gift giving. In 2021, about half of surveyed Dutch people planned to buy presents for Christmas and/or Sinterklaas. Some of the gifts people most frequently bought for one another were food and drinks, as well as cosmetics and perfumes. The majority of respondents also stated that they usually receive gifts over the course of the holiday period, with some 90 percent getting at least something during Sinterklaasfeest. When purchasing Sinterklaas gifts, specifically, consumers in the Netherlands intended to spend over 130 euros in 2021, an increase compared to one year earlier.

Christmas shopping habits in other parts of Europe

Although consumers in the Netherlands were expected to spend an estimated total of nearly 13 billion British pounds in retail during Christmas, certain other countries were projected to spend far more. For instance, in 2021, Christmas retail expenditures of shoppers in the United Kingdom and Germany were expected to reach a total of roughly 85 and 75 billion British pounds, respectively. Belgium, which is more comparable to the Netherlands in terms of size, and which also celebrates Sinterklaas, was expected to spend approximately ten billion pounds.
This text provides general information. Statista assumes no liability for the information given being complete or correct. Due to varying update cycles, statistics can display more up-to-date data than referenced in the text.

D. Tighe
Research expert covering shopping behavior, sports and leisure retail, and the subscriptions and direct selling industry
Get in touch with us now
Published by D. Tighe, Dec 14, 2021

Online and offline Christmas spending in the Netherlands 2019-2020

Total value of Christmas trees imported to the Netherlands in 2021
6.73m EUR 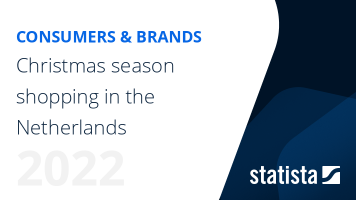 The most important key figures provide you with a compact summary of the topic of "Christmas shopping in the Netherlands" and take you straight to the corresponding statistics.