Published by
P. Smith,
Nov 17, 2022
The global apparel industry is a complex, giant machine that churns out billions of clothing articles and accessories, reaching millions of consumers worldwide. In 2021, the market revenue for apparel and accessories was estimated to be worth over 1.7 trillion U.S. dollars. While the leading names of the apparel industry typically originate from Europe or North America, the majority of manufacturing and production for these companies happen elsewhere, mostly in countries in Asia where wages are lower. In fact, according to International Labour Organization, Asian garment workers made up 75 percent of worldwide employment in the garment manufacturing sector.

China is the leading supplier of clothing worldwide, accounting for more than 40 percent of worldwide exports. After China, the EU as a bloc is responsible for almost 20 percent of global clothing exports. In the EU, there were around 922 thousand people working in the manufacturing of clothing items. This number pales in comparison when garment employment in Asia comes into the picture. In 2019, 65 million people were estimated to be working for the garments sector in Asia, with women representing more than half of this figure. In South Asia, employment in the garment sector constituted 4.3 percent of all employment.

While the clothing manufacturing sector plays an important economic role in Asian countries, working conditions associated with the industry are far from fair. This was further exacerbated by the coronavirus (COVID-19) pandemic, when many retail brands reduced or cancelled orders, which in turn led to many workers not being paid their full salaries, or being laid off. According to a recent investigation into wage conditions of garment workers in Asia, on average the monthly basic wage of a garment worker was as low as 95 U.S. dollars in Bangladesh. The same study also revealed that since the start of the pandemic in March 2020, there were more than 700,000 job losses among garment workers in India.

Despite social and ethical issues surrounding apparel sourcing, many well-known fast fashion companies outsource their manufacturing to overseas factories, with China, again, being the leading location of factories brands such as Inditex Group or H&M use. Over the years, initiatives coming from the fashion industry to make it more transparent and ethical succeeded in making many brands disclose their supply chain relations. Based on the amount of information they provide as to their supply chain practices and policies, many brands have already been identified as making sufficient efforts. But consumers still think fashion brands could do more when it comes to publishing more information about wages and working conditions in their supply chain. Similarly, the impact of the industry on societies and the environment has become something that consumers pay more attention to. More than seven in ten consumers in major European economies agreed it was important for brands to make their social and environmental policies publicly available.

In the following 4 chapters, you will quickly find the 27 most important statistics relating to "Apparel supply chain worldwide". 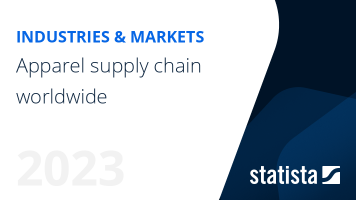 The most important key figures provide you with a compact summary of the topic of "Apparel supply chain worldwide" and take you straight to the corresponding statistics.