Published by
Koen van Gelder,
Feb 21, 2022
Albert Heijn is a supermarket company from the Netherlands, and is part of the global Ahold Delhaize group. This chain has its origins in 1887, when Albert Heijn bought a grocery store in Oostzaan. Today, Albert Heijn boasts a total of about 870 Dutch supermarkets, the highest number of outlets out of all food chains in the Netherlands.
Accounting for roughly a third of the national market, Albert Heijn was unequivocally the leading company within the country’s food retail industry in 2020. Jumbo, which accounted for just over 20 percent and is Albert Heijn’s top competitor, has grown considerably over the past decade and is likely to keep up the pace for years to come.

In 2021, the Dutch supermarket landscape consisted of about 6.7 thousand stores in total. Starting at just over six thousand in 2014, the number of supermarkets in the country has increased incrementally each and every year. In 2020, Dutch supermarkets accounted for a combined total of roughly 39 billion euros in revenue, which translates to an average annual revenue of nearly six and a half million euros per location. That year, supermarket revenue was noticeably higher than usual, which may have been the result of the coronavirus (COVID-19) pandemic and subsequent lockdowns.

Ahold Delhaize is a multinational corporation and is the parent company to several brands, including Albert Heijn, Food Lion, Delhaize, Pingo Doce, etc. Despite starting off and having its headquarters in Europe (Zaandam, Netherlands), the company made just over 60 percent of its global net sales in the United States in 2020. Overall, the company generated a total of almost 75 billion euros' worth of net sales that year, making it one of the largest supermarket chains across the globe.

In the following 4 chapters, you will quickly find the 20 most important statistics relating to "Albert Heijn". 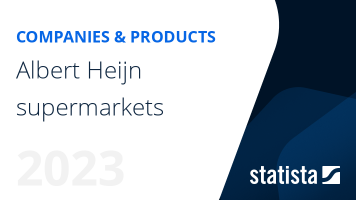 The most important key figures provide you with a compact summary of the topic of "Albert Heijn" and take you straight to the corresponding statistics.