When it comes to searching for product inspiration or details, consumer electronics is one of the segments that shoppers in the United States are most likely to look for online. Be it a TV set, a smartphone, or a computer, at least five in ten U.S. internet users mostly search for information online before purchasing, far more than in any other product category. Since the COVID-19 pandemic, U.S. consumers are more familiar with buying their electronic devices online than ever before. Compared to other products, consumer electronics ranks among the top three items most bought online in the U.S. within 12 months, at over 30 percent of respondents as of 2021. Not for nothing, the United States is the second-largest e-commerce market for electronics worldwide, only surpassed by China.

Market size matters but isn't everything

The United States does not only stand out globally for its high online demand for electronics. Encompassing consumer devices and home appliances, it is also the second-highest revenue-generating segment in U.S. e-commerce, right behind fashion, with more than 160 billion dollars in sales in 2021. Strictly speaking about consumer electronics online retail, the figure is set to exceed 130 billion in 2022 and 155 billion by 2025.

With such a steep rise, one could argue that the consumer electronics' share in total U.S. retail e-commerce should grow accordingly. Yet, the percentage of online retail sales dedicated to these products is estimated to shrink compared to the whole market's revenue. From over 20 percent in 2021, the consumer electronics' share is forecast to decrease to 15 percent of total retail e-commerce sales by 2025, while other segments such as food, beverages, and beauty take increasingly larger pieces of the U.S. e-commerce cake.

Amazon, Amazon, and Amazon. The online shopping platform's dominion over U.S. e-commerce will not take anyone by surprise. And for consumer electronics, this hegemony is particularly evident. If we analyze the leading online stores in the U.S. consumer electronics segment, Amazon wins by a landslide, with over 38 billion dollars in e-commerce sales in 2020. The second-highest revenue-generating website was Best Buy, a specialized consumer electronics retailer. Even with staggering online sales of over 15.5 billion, the figure barely represents 40 percent of Amazon's.

As far as online sales go, any comparison with Amazon may seem unfair. But if we compare major online stores by advertising reach and media spending, differences might look dimmer. According to a 2021 study, Amazon led the list of consumer electronics e-tailers by share of voice, which measures a company's share of total media expenditure in a given category. With about 4.25 percent, Amazon surpassed some of the best-known brands in the sector, such as Samsung, which accounted for nearly four percent. GoPro, Dell, and Apple followed not so far behind. Still, Amazon lives up to its behemoth reputation in retail media advertising expenditure in the U.S. market, with an almost 90 percent ad spend share in 2021.
This text provides general information. Statista assumes no liability for the information given being complete or correct. Due to varying update cycles, statistics can display more up-to-date data than referenced in the text.

Marina Pasquali
Research expert specializing in economy and politics
Get in touch with us now
Published by Marina Pasquali, Feb 3, 2022

Online purchases by category in the U.S. 2022 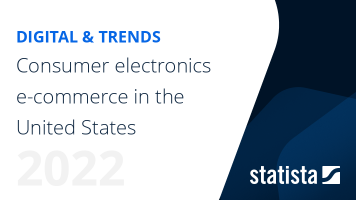 The most important key figures provide you with a compact summary of the topic of "Consumer electronics e-commerce in the U.S." and take you straight to the corresponding statistics.