Published by Statista Research Department, Jan 12, 2022
Domestic travel refers to citizens of a country traveling within their country’s borders for recreation, as opposed to traveling internationally. In France, the number of domestic overnight French visitors peaked in 2013, before experiencing a steady decline up to 2019. Despite the decline in domestic overnight visitors, domestic tourism expenditure in France increased slightly over the same period. However, both figures experienced a steep drop in 2020 due to the impact of the coronavirus (COVID-19) pandemic on the global travel industry. Nevertheless, domestic travel was not as hard hit as the international travel market, with border closures severely limiting traveling abroad. In 2020, a majority of the French population, nearly 70 percent, indicated that they did in fact take a domestic trip in France that year.

By and large, leisure travel typically dominates travel markets, while business travel makes up just a small portion of the market. In regard to the French domestic travel market, this was also the case. In 2020, there were over 120 million domestic leisure trips in France, and around 10 million domestic business trips. Over half of the French citizens surveyed that year took short domestic trips, between one and three nights. Longer domestic vacations were also popular, with over a quarter of French respondents taking domestic trips over a week. One potential benefit to domestic travel compared to traveling abroad is that often many of the traveler’s family and friends live in the same country, which leaves the traveler more accommodation options outside of hotels. Among those who took leisure trips in France in 2020, most French domestic travelers stayed with family members, while around five percent took a room in a hotel.

France is home to a variety of regions and climates, from the urban metropolis of Paris and the rainy northwest coast of Normandy to the French Alps and the island of Corsica in the Mediterranean. It comes as no surprise then that the primary reasons travelers gave for choosing a domestic travel location in France were for the climate or to get a change of scenery. The area that saw the highest number of domestic trips in France in 2020 was the region of Auvergne-Rhône-Alpes in the southeast, home to the French Alps and the city of Lyon. Another popular region for domestic travelers that year was New Aquitaine on the southwest coast, home to the city of Bordeaux and famous for its water sports and wine production. The region where Paris is located, Île-de-France, was not one of the top domestic travel locations. This was likely due to the fact that the capital city was the region of origin of most French domestic travelers that year.

In the following 5 chapters, you will quickly find the 23 most important statistics relating to "Domestic tourism in France". 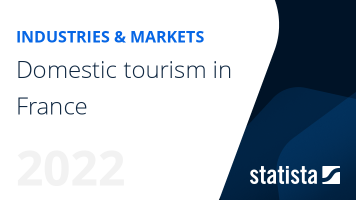 The most important key figures provide you with a compact summary of the topic of "Domestic tourism in France" and take you straight to the corresponding statistics.

Travel and tourism in France

Impact of the coronavirus on the tourism industry in France