Association soccer is arguably the dominating sport in Europe and South America in terms of finances and exposure. While this is not the case in many other parts of the world, the sport is gaining popularity in certain countries in East Asia, such as Japan and China. Both countries launched their current association soccer leagues relatively recently. Japan’s professional soccer circuit is called the J. League and is one of the most successful sports leagues in Asia. The J. League’s inaugural season was in 1993, starting with 10 teams. Ever since, the J. League has been expanding, developing into a three-tier system in the shape of the divisions J1, J2, and J3. In the course of its development, the J. League saw a continuous increase in the number of member teams. General matters of the league are managed by J. League Inc., the governing body of the circuit.

In professional soccer, revenues earned from entry fees at stadiums alone are not enough to cover the operating costs of soccer clubs. The J. League is no exception. Next to the admission fees at matches, the income sources of professional soccer teams in the J. League also include revenue from official (corporate) sponsorships, allotments from the circuit’s governing body, and revenue from broadcasting rights, among others. Throughout the circuit’s history, J. League teams recorded a healthy growth trajectory regarding operating profits, until this trend was dented by the COVID-19 pandemic. More income made larger investments possible and is also reflected in the personnel expenses of teams, which nearly doubled in the past decade.
The advent of the COVID-19 pandemic has put a strain on professional soccer, as important sources of income, such as the revenue from ticket sales, have considerably diminished. While the income from sponsors and allotments from the circuit’s governing body, that make up the lion’s share of the revenue of J. League clubs, and other income sources have declined slightly, the sharp drop in revenue from ticket sales has brought clubs in a dire financial situation, with a record number of teams ending their fiscal year on a deficit during 2020.

The spectators at venues and the home audiences are the flesh and blood of professional soccer. Since its inaugural year, the J. League has been successful in cultivating domestic interest in soccer, in particular concerning visitors at live venues, attracting an increasingly high number of attendances at stadiums. For an East-Asian sports league, the J. League also ranks high in average attendance per match figures, albeit there is a considerable gap between the J. League and Japan’s most popular sports league, the NPB. On the other hand, the estimated number of J. League fans in Japan, including home audiences, stagnated during the past decade.
The general approach to growth and engagement with supporters in the J. League is focused on grassroots involvement with the respective team’s hometowns. Ideally, soccer teams are to financially reinvigorate local communities and contribute to local social projects, while in return the teams receive moral and also financial support from the region. This organic approach to cultivating fans has created a firm (fan)base for the teams but has not succeeded as of yet in stirring a soccer craze. To further the popularity of the circuit, J. League management has launched new projects to commercialize and increase the exposure of the J. League internationally, doubling the number of foreign followers on social networks between 2018 and 2021.
This text provides general information. Statista assumes no liability for the information given being complete or correct. Due to varying update cycles, statistics can display more up-to-date data than referenced in the text.
Alexandru Arba
Research expert covering Japan
Get in touch with us now
Published by Alexandru Arba, Apr 28, 2022

Total attendance at J. League matches during past season
5.03m

Average per game attendance of J1 League matches 2022, by team 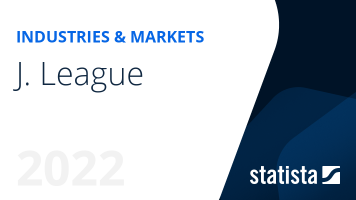 The most important key figures provide you with a compact summary of the topic of "Professional soccer in Japan" and take you straight to the corresponding statistics.

Spectating during the pandemic