Published by
Federica Laricchia,
May 10, 2022
Consumer electronics refers to electronic devices such as televisions, computers, and smartphones that are purchased by users for daily and personal purposes. In the last couple of years, the consumer electronics market largely expanded in Italy, perhaps due to the coronavirus (COVID-19) pandemic. Being in lockdown for several months, the demand for such digital devices both for work and entertainment purposes increased. Indeed, the revenue of the consumer electronics industry peaked at 16.8 billion U.S. dollars in the southern European country in 2021, a value that has never been reached before and that is not forecast to be reached again in the coming years.
Italians’ “love” for this industry is said to be growing and they do not miss any opportunities to buy consumer electronics devices, whether in-store or online. For instance, during the 2021 Black Friday week, smartphone, TV, and laptop devices generated combined revenue of 492 million euros (547 million U.S. dollars) in Italy. Furthermore, when buying such devices, consumers can decide among many consumer electronics retailers, such as Apple, Samsung, Sony, and LG Electronics, with retailers offering both physical and online stores.

Among all consumer electronics devices, smartphones are the most important to Italians, to the point that, during a 2021 Statista survey, over half of them stated that they could not live without their smartphones. Over the coming years, this industry is forecast to stay relatively stable. By 2026, with roughly 45 million Italian smartphone users, the Italian mobile phone market is expected to reach around 10.12 billion U.S. dollars.

Nowadays, with online teaching and home office due to the pandemic, computers also play a major role in an Italian’s everyday life - especially laptops, the market revenue of which is forecast to increase compared to that of desktop PCs and tablets. In 2020, the share of Italian computer users was 55 percent: most of them were aged between 20 and 24 years old and were university or Ph.D. students.

The growth of the Italian consumer electronics market is supported by the popularity of Internet of Things (IoT) devices in the country. For instance, Italians own smart speakers in their homes, like Amazon Echo, and use wearables, such as smartwatches and fitness trackers. In addition to this, with a total of almost nine hours per week on home and portable consoles, Italians also enjoy playing video games. Particularly, in 2021, Sony was the leading console vendor, with a market share of over 77 percent.

In the following 9 chapters, you will quickly find the 45 most important statistics relating to "Consumer electronics in Italy". 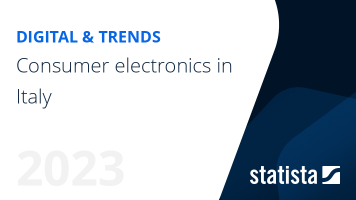 The most important key figures provide you with a compact summary of the topic of "Consumer electronics in Italy" and take you straight to the corresponding statistics.