The software industry is one of the key components of this technological era. From transportation and manufacturing to nuclear plants and medicine, software holds the power of making our lives easier. Our reliance on software continues to increase as the world rapidly advances in a century of artificial intelligence, machine learning, automation, and 5G technologies.
The software industry in Latin America has faced many challenges in its journey towards innovation and growth. Cross-country cultural differences, combined with the variety of government laws and currency restrictions, made it difficult for Latin American countries to expand their regional software market until recently. In 2021, the software industry in Latin America generated revenue worth 22.1 billion U.S. dollars, with the enterprise software segment accounting for nearly 40 percent of the market.

Any application used for producing information, such as documents, presentations, databases, and graphs is based on a productivity software; simply put, its name derives from the fact that it increases people’s productivity making them more efficient in their daily activities. In 2021, Latin America’s productivity software industry revenue totaled around 2.75 billion U.S. dollars, out of which 2.1 billion U.S. dollars were generated in South America. It comes as no surprise that the Office Software represented the most valuable segment in the productivity software revenue in Latin America, since it is always up to date, it is safe and secure, it has improved use of the cloud, and it provides effective team collaboration features.
By contrast, enterprise software is a business-oriented tool, used to satisfy the needs of a company rather than an individual. The number and types of software a company needs varies from one business to another. From project management tools, data analysis, communications tools, to custom-made software programs – these types of enterprise software became essential to running a company in the age of digitalization. In 2021, Mexico’s customer relationship management software market value was worth nearly half a billion U.S. dollars. In contrast, Brazil’s business intelligence software market amounted to 654 million U.S. dollars.

The land of unexplored opportunities

Overall, the software market in Latin America is expected to register significant growth in the upcoming years. For instance, Argentina’s software market was valued at 1.9 billion U.S. dollars in 2021 and was expected to increase to 2.8 billion U.S. dollars by 2026. Moreover, Brazil’s software market was forecast to increase by nearly six billion U.S. dollars from 2021 to 2026. The coronavirus (COVID-19) pandemic has determined an exponential increase in Latin America’s digital industry, requiring considerable investments in data security as well as an accelerated migration to the cloud. In 2020, Brazil’s Software as a Service market peaked at 1.5 billion U.S. dollars, increasing by 26 percent compared to 2019. Then why is Latin America the land of hopes concerning SaaS in particular? First, mobile technology and internet usage are rapidly expanding across the region. Second, several governments have implemented measures that facilitate opening a new business, with the purpose of enabling foreign companies to expand more easily in the region. Consequently, venture capital investments in the Latin American SaaS industry have set the groundwork for profitable B2B opportunities, with market investments exceeding 1.8 billion U.S. dollars in 2020.
This text provides general information. Statista assumes no liability for the information given being complete or correct. Due to varying update cycles, statistics can display more up-to-date data than referenced in the text.

Revenue of the software industry segments in Latin America 2021, by region

ISVs per country in Canada, USA, and Latin America 2022

Number of venture capital investments in the SaaS industry
1,270

Revenue of the software industry segments in Latin America 2021, by region 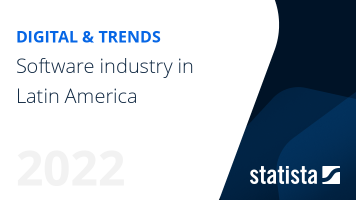 The most important key figures provide you with a compact summary of the topic of "Software industry in Latin America" and take you straight to the corresponding statistics.