With smart product strategies, Tencent’s WeChat has become the king of apps in China where the global internet heavyweights are absent. Within a decade, this Chinese mega app has now become one of the strongest global brands with 1.26 billion monthly active users, equating to about 80 percent of China’s total population. Yet, it is hard to anticipate whether WeChat can remain on its throne for long. With the rise of other social apps and Beijing’s ongoing antitrust drive, it seems plausible that this could give birth to an arsenal of more diverse app ecosystems in the country.

From a messenger to an all-around app

WeChat was launched by the Chinese tech behemoth Tencent in 2011. In essence, its purpose was to serve as an equivalent to WhatsApp. However, the hallmark that takes it beyond just basic messaging is its underlying product philosophy – connecting everything in one app. WeChat has proved its feasibility by building an ecosystem within the app where third parties can develop their own mini-applications, namely WeChat Mini Programs.

Inside the universe of WeChat

This concept has totally changed China’s mobile usage. For many Chinese smartphone users, this flagship product of Tencent is more like a survival tool than just a social media. It is the home screen for money exchange, shopping, ride-hailing, food delivery, dating, and so much more. With such versatility, WeChat achieved a whopping 88 percent of daily usage rate and a penetration rate of 83 percent in its mini-programs in 2021.

Given WeChat’s massive userbase, it comes as no surprise that the super app is an important marketing channel for brands. Its in-app features, particularly WeChat Search, WeChat QR Codes, and WeChat Moments are critical to drive traffic and sales within the Chinese market. Furthermore, many companies in China are using WeChat in daily business operation as well, such as WeChat Pay for a seamless payment solution. WeChat Mini Programs are also well-received as they save companies technical resources and time needed for app development with advanced digital functions.

Undoubtedly, WeChat’s success with its super app status can be attributed to investments in research and innovation. Facing fierce competition from domestic rivals, the app has added short-video feeds and bullet comments as the latest attempt to stay competitive. In response to Beijing’s stricter privacy policies, it rolled out internal testing on a new data transparency feature at the beginning of 2022. In light of China's incessant tech crackdown which shows no signs of abating, WeChat along with other domestic internet giants have long been targets on issues relative to anti-monopoly and data security. Some industry observers see Douyin (TikTok’s Chinese sister app) as the top contender to share the throne with WeChat when the regulatory headwinds continue.
This text provides general information. Statista assumes no liability for the information given being complete or correct. Due to varying update cycles, statistics can display more up-to-date data than referenced in the text.
Lai Lin Thomala
Research expert covering Greater China
Get in touch with us now
Published by Lai Lin Thomala, Mar 4, 2022 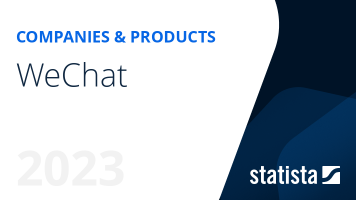 The most important key figures provide you with a compact summary of the topic of "WeChat" and take you straight to the corresponding statistics.

Other features and sister apps