With its use of connected devices to perform and automate actions and tasks in the home, setting up what is known as Smart Home is a trend that appears to have come to stay. In Italy, the Smart Home market value amounted to 505 million euros in 2020. The smart appliances segment alone is forecast to generate over 575 million euros in revenue by 2025.

In the following 5 chapters, you will quickly find the 31 most important statistics relating to "Home appliances in Italy". 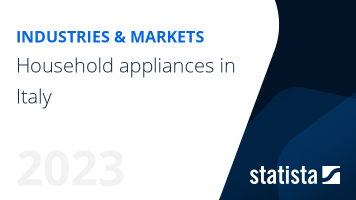 The most important key figures provide you with a compact summary of the topic of "Home appliances in Italy" and take you straight to the corresponding statistics.