Vietnam’s telecommunications industry played a central role in the country’s rapid technology adoption, industrial transformation, and economic growth in the last decade. Telecommunication services, including mobile and broadband subscriptions, as well as mobile data, have become indispensable in the daily life of people in Vietnam, where the share of internet users and mobile phone users are among the highest in the Asia Pacific region.

One of the most significant achievements of the telecommunications sector in Vietnam was providing country-wide internet coverage, especially of mobile internet. Mobile networks such as 3G and 4G have reached almost all the Vietnamese population, next to an increasing number of terrestrial fixed-line broadband subscribers. In addition, internet users in Vietnam have access to a relatively high internet connection speed and download speed compared to other countries in the same regions. Furthermore, the government has developed a concrete plan to implement and commercialize the 5G network in 2022, starting first in urban areas and high-tech industrial zones, which should further improve the internet connection quality in the country.

State-owned enterprises Viettel and VNPT are the leading telecommunications service providers in Vietnam. Operated by the Ministry of Defense, Viettel dominates the mobile-cellular service segment, with over half of the total market share. Together with VNPT, the two state-owned telecommunications groups held approximately 80 percent of the broadband service market in 2020. On the other hand, non-state Vietnamese telecommunications firms such as FPT Group have also gained a strong foothold within this sector.

Although local players dominate the market, several foreign companies have entered the telecommunications service market in Vietnam, mostly in the form of joint ventures with Vietnamese companies. These joint ventures, such as Vietnamobile, S-Fone, and Beeline, have been struggling to acquire new users, despite having introduced heavy promotions, including attractive data pricing plans and unlimited voice calls. Meanwhile, the homegrown telecommunications group Viettel has expanded into neighboring markets and secured the forerunner position for mobile phone services in countries such as Laos, Cambodia, and East Timor.
This text provides general information. Statista assumes no liability for the information given being complete or correct. Due to varying update cycles, statistics can display more up-to-date data than referenced in the text.
Minh-Ngoc Nguyen
Research Expert covering Vietnam
Get in touch with us now
Published by Minh-Ngoc Nguyen, Mar 14, 2022

Revenue of telecommunication services in Vietnam 2010-2021

Total foreign investment capital in the IT, electronics, and telecommunications industry in Vietnam
1.5bn USD

IT and electronics-telecommunications foreign investment capital in Vietnam 2018-2020 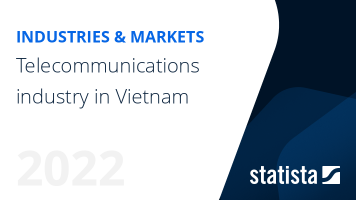 The most important key figures provide you with a compact summary of the topic of "Telecommunications industry in Vietnam" and take you straight to the corresponding statistics.